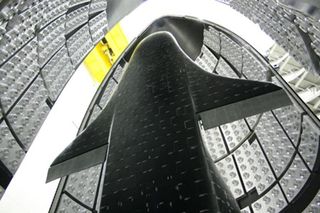 A belly view of the U.S. Air Force's X-37B Orbital Test Vehicle as it sits inside its payload fairing during encapsulation at the Astrotech facility in Titusville, Fla., before its planned April 2010 launch.
(Image: © USAF)

A robotic Air Force space plane that launched in late Aprilunder a shroud of secrecy is most likely an orbital spy vehicle, and not aspace weapon or weapon platform, a former U.S. Air Force officer says in a newreport.

"Certainly that's a possibility, but I don't see anyevidence that it's being used like that," Weeden said. "The problemis beingso hush-hush about what its mission is, and not disclosing the mission onorbit and not disclosing where it is in orbit."

The sense of mystery surrounding the X-37B's first spaceflightlast month led to speculation about new U.S. space weapons, with some spacetechnology experts contending it could contribute to worries among othernations such as Russia and China over U.S.space military capabilities. Gary Payton, Air Force deputy undersecretaryof space programs, previously dismissed rumors that the X-37B space plane, knownas the Orbital Test Vehicle 1, is the vanguard for a space weapon fleet. [X-37Bspacecraft photos.]

The reusable space plane is the first vehicle since NASA'sspace shuttles to have the ability to return experiments or hardware to Earthfor inspection, Air Force officials have noted.

That unique capability will grow only rarer once the final spaceshuttle missions are flown over the next half-year or so, which may haveencouraged the Air Force to order a second X-37B — the Orbital Test Vehicle 2 —slated to fly in 2011.

An X-37B fleet would probably prove most useful as reconvehicles that could land and get new sensor configurations for differentmissions, Weeden explained. The space planes could also maneuver more thansatellites can in order to adjust their orbits and provide flexible coverage ofdifferent areas on the ground.

"Let's say something pops up in area X in some part ofthe world, and a ground commander needs some capability there: [the X-37B]could configure and launch into an orbit that's optimized to cover that,"Weeden told SPACE.com.

Having a smaller shuttle-like vehicle would also allow theAir Force to test new hardware or sensors in orbit, possibly for later launchaboard recon or spy satellites. That would give such equipment a much-prized"space heritage" or proven ability to function in space, whicheliminates uncertainty and the costs of possibly launching something thatdoesn't work as intended.

The X-37B also has the ability to carry OperationallyResponsive Space (ORS) satellites into orbit, in case the U.S. military needssituational awareness in a new area.

Not a space repair droid

But there are also some limitations, Weeden said, given thatthe space plane's payload size is roughly equivalent to a pickup truck bed. Thatmeans it likely would not find a good fit serving as a retrieval or repair shipfor satellites.

The space shuttle's payload bay, by contrast, is huge. It couldfit two entire X-37Bs inside.

"Once you put an arm and other equipment into the [X-37B]payload, how much room is left to put the satellite you capture?" Weedenpointed out. "Most military satellites are really big."

Even using the space plane to launch smaller satelliteswould be much less cost-effective than just several ORS payloads on their ownrocket booster, Weeden concluded.

He estimated the cost of a single space plane launch asbeing about $100 million based on the average cost of the Atlas V rocket thatblasted off with the first X-37B. That's more than the entire ORS budget for2010 and beyond.

The same payload and cost-effectiveness restrictions wouldalso make roles such as satellite inspection and repair less likely, Weedensaid. But other nations can also take comfort from the fact that the X-37B isunlikely to grapple with any of their satellites as well.

As for space weaponcapabilities, Weeden rated that likelihood as "zero."

The payload restrictions would make it difficult for anX-37B to deploy hyperkinetic weapons which travel at high speeds with pinpointaccuracy, given that any weapon would require big thrusters to perform ade-orbit burn for reentry into Earth's atmosphere.

The X-37B also reenters like the space shuttle landing atabout 200 mph and would glide down as a slow moving, not-very-maneuverabletarget that could easily fall prey to air defense systems.

Still, the many other possibilities offered by the X-37Bhave made it attractive for the U.S. military, Weeden said. But that same rangeof possible roles has also made nations such as Russia and China nervous.

The United States remains the only nation with global spacesituational awareness based on an array of satellites and ground sensors, whichmeans that other nations can't check up on the X-37B's activities and divineits true purpose.

"I absolutely think this is the case [where secrecy isnot always good], especially when it's clearly dual use and clearly going toupset some people," Weeden noted.

Weeden suspects that the X-37B currently circling somewhereoverheard may be doing experiments for the National Reconnaissance Office,which operates U.S. spy satellites. And that could explain the Air Force'scurrently sealed lips about the mission.