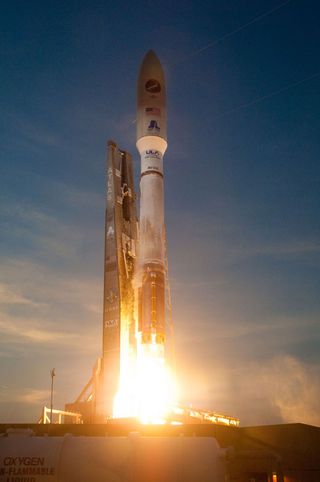 The unmanned military Orbital Test Vehicle 1 (OTV-1) — also known as the X-37B — lifted off at 7:52 p.m. EDT (2352 GMT) atop an Atlas 5 rocket on a mission that is expected to take months testing new spacecraft technologies.

The X-37B is a reusable robotic space plane built by Boeing Phantom Works. Its mission is being carried out under the Air Force Rapid Capabilities Office with participation by NASA.

Key objectives of the space plane's first flight include demonstration and validation of guidance, navigation and control systems — including a "do-it-itself" autonomous re-entry and landing at California's Vandenberg Air Force Base with neighboring Edwards Air Force Base as a backup.

The X-37B is the first vehicle since NASA's space shuttles with the ability to return experiments to Earth for further inspection and analysis, Air Force officials said.

"This is a new way for the Air Force to conduct on-orbit experiments," explained Gary Payton, Air Force deputy under secretary for space programs, during a Tuesday press teleconference.

The designed maximum on-orbit duration for the X-37B is 270 days, Payton said. "In all honesty, we don't know when it's coming back for sure. It depends on the progress that we make with the on-orbit demonstrations," he added.

Thursday's launch capped a long road to orbit for the X-37B spacecraft. NASA initially began the project in 1999 and later transferred it to the Defense Advanced Research Project Agency (DARPA) in 2004 due to a lack of funding. The Air Force stepped in 2006 to take over the project.

"As the first U.S. unmanned re-entering space vehicle, the first of its kind, it has been remarkably easy to work with," said Air Force Lt. Col. Erik Bowman, 45th Launch Support Squadron Commander, after the successful launch.  "Processing and preparations went extremely smooth, and there were absolutely no delays in the vehicle processing."

Circling the Earth, the X-37B space plane has a full agenda of shaking out new technologies, including advanced guidance, navigation and control. Once the vehicle's payload bay doors open to space, power is provided by a deployable array of gallium arsenide solar cells coupled with lithium-ion batteries.

But after that action item is checked off, what else the X-37B will do becomes a tight-lipped affair.

"Actual on-orbit activities we do classify — for the experimental payloads that are on-orbit with the X-37," Payton said. There's enough payload room, he added as example, to house a couple of small satellites in the range of a few hundred kilograms each.

Given the X-37B's secretive duties, some analysts contend that the mission is provocative, perhaps fanning the flames for war in space.

"Truthfully, I don't know how this could be called 'weaponization' of space," Payton said. "Fundamentally, it's an updated version of the space shuttle kind of activities in space," he added, a new vehicle that could potentially help the Air Force do its space missions better.

Perhaps a key show and tell feature of the X-37B is its self-guided entry and landing in California. In the event the vehicle strays off course as it swoops down over the Pacific Ocean, the space plane is outfitted with a destruct mechanism.

This SPACE.com X-37B graphic illustrates some details of the space plane and its relative size.

The Air Force has already ordered a second X-37B, presumably the Orbital Test Vehicle 2, which is slated to launch in 2011. But that mission, and any new flights of this first vehicle, hinge on the performance during orbital and landing maneuvers, Air Force officials have said.

Tale of the V-tail

The X-37B carries two short vertical stabilizers in the back rather than one vertical as seen on the shuttle orbiter.

There were several reasons for the V-tail "ruddervators" — a high-tech wordsmithing of rudder and elevator, explained Angie Blair, an Air Force spokeswoman for the project. For one, the short V-tails provide better packaging within the 5 meter in diameter Atlas 5 fairing than a single, taller vertical stabilizer, she said.

Secondly, the more forward wing location of the X-37B enables the V-tails to be very effective in the high angle of attack, hypersonic portion of the entry trajectory. That reduces the amount of reaction control system propellant needed for trim and control of the craft, Blair said.

As the craft draws a bead on its landing locale, a speed brake will be employed.

"A split ruddervators/speed brake like the space shuttle is not feasible in a small vehicle like the OTV," Blair noted. Aerodynamic testing and other studies, she said, led to the vehicle?s upper center line speed brake and V-tail ruddervators as the best performing system solutions for the X-37B.

En route to the runway, new thermal protection systems will be evaluated. So too will be avionics, high temperature structures and seals, conformal reusable insulation, as well as lightweight electromechanical flight systems.

Even after touching down, the X-37B is to yield insight into fast turnaround, operations and maintenance. The craft does carry some vehicle health monitoring subsystems to speed its readiness for re-flight, Payton told SPACE.com.

"If these technologies on the vehicle prove to be as good as we currently estimate, it will make our access to space more responsive, perhaps cheaper, and push us in the vector of being able to react to warfighter needs more quickly," Payton concluded.