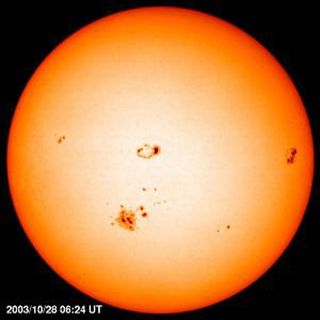 The surface of the sun undergoes violent changes on a dailybasis, but a group of astronomers has found that the size of our nearest starhas been perplexingly constant in recent years.

The new study shows that the sun's diameter has changed byless than one part in a million over the last 12 years. The sun's width todayis a steady 932,057 miles (1,500,000 km) across, the researchers found.

"The sun is remarkably constant," lead researcherJeff Kuhn, the associate director of the University of Hawaii Institute forAstronomy, told SPACE.com. "We're measuring that the diameter changes byless than a kilometer (0.62 miles).

"This constancy is baffling, given the violence of thechanges we see every day on thesun's surface and the fluctuations that take place over an 11-year solarcycle," Kuhn said.

The puzzling results also contradicted other measurements ofthe sun taken from the ground, raising further questions on what could becausing the discrepancies.

"What this really means is that, if we believe theground measurements, then what we're seeing is long-term fluctuations in theEarth's atmosphere," Kuhn said. "The sun is influencing theatmosphere of the Earth in very significant ways."

Kuhn's work is one of several worldwide efforts tounderstand the influence of the sun on Earth'sclimate.

"We can't predict the climate on Earth until weunderstand these changes on the sun," Kuhn said.

Kuhn and his colleagues used NASA's Solar and HeliosphericObservatory (SOHO) satellite to monitor the sun's diameter. They will soonrepeat the experiment with much greater accuracy using NASA's new SolarDynamics Observatory (SDO), which launched Feb. 11.

The SDO carries three instruments that constantly study thesun in unprecedented high-definition detail and could help with futureexaminations of solar size.

According to Kuhn, the ultimate solution to this puzzle willdepend on probing the smallest observable scales of the solar surface using theAdvanced Technology Solar Telescope (ATST), which is scheduled to be completedon Haleakala (on the Hawaiian island of Maui) in 2017.

"To be able to predict what the sun will do, we needboth the big picture and the details," Kuhn said. "Just as powerfulhurricanes on Earth start as a gentle breeze, the analogs of terrestrial stormson the sun start as small kinks on the sun's magnetic field."