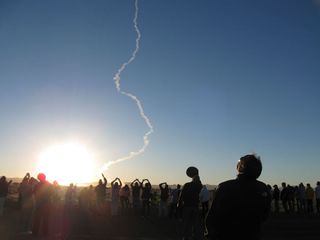 The wispy trail from the early morning liftoff of UP Aerospace SpaceLoft XL booster at Spaceport America was a crowd-pleaser. The rocket carried student experiments and human ashes on a suborbital flight.
(Image: © Barbara David)

The early morning launch of the UP Aerospace SpaceLoft XLrocket was staged from SpaceportAmerica ? a remote site outside Upham, New Mexico that is nowa scene of fast-paced construction. Spaceport America is tagged as the firstpurpose-built commercial space facility.

The launch carried capsules packed with crematedremains from the United States, China, Taiwan, and Great Britain. After theflight the containers were recovered and will be returned to the families of?Pioneer Flight? participants.

?We are very pleased to share today?s success with ourfamilies and partners at New Mexico Space Grant Consortium and UP Aerospace andlook forward to many more successful missions in the future,? Chafer toldSPACE.com. ?The Celestis service remains the most compelling memorial serviceon or off the planet,? he added.

The flight was an Earth Rise (suborbital) mission offered byCelestis. The group worked with the primary sponsor of the mission -- the NewMexico Space Grant Consortium -- by providing matching funds that assistedstudents to launch their experiments into space.

The rocket launch showcased a new era of access to space forstudent experiments.

?Today is all about what SpaceportAmerica was created for?about education, it?s about jobs, it is aboutcareers and new opportunities in New Mexico,? said Rick Homans, Board Chairmanof the New Mexico Spaceport Authority shortly after the rocket?s launch andpayload landing.

?I?m speechless. It was a perfect flight,? said JerryLarson, president of Colorado-based UP Aerospace. He told SPACE.com that themission was a total success from liftoff to touchdown, landing only two milesfrom the target 35 miles away on White Sands Missile Range.

Lockheed Martin provided a pre-launch mission assurancereview of the booster, appraising the readiness for flight of the entire rocket- from avionics to parachute deployments.

In a post-launch review, Larson said the rocket reached 70miles altitude, hitting a top velocity of Mach 5.5 ? five and a half times thespeed of sound. ?So she was really cooking,? Larson added.

The booster?s solid rocket motor burned for 12 seconds on ahigh-speed trajectory followed by a long coast period. A parachute system ledto touchdown of the payload at nearby White Sands Missile Range at a very modest10 miles per hour.

?It was a nice soft landing. Your payloads are going to beperfect,? Larson advised the students during his debriefing remarks.

??Today?s launch is confirmation to New Mexico?s studentsand the rest of the world that we are capable of delivering the goods when itcomes to scientific development, aerospace research and intellectual capital,?said Pat Hynes, Director of the New Mexico Space Grant Consortium in a pressstatement.

Hynes said that the launch was dedicated to the memory ofDebbie Prell, a Farmington, New Mexico science and technology teacher who diedof breast cancer in 2005.