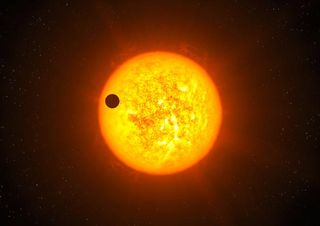 This artist's impression shows the transiting exoplanet Corot-9b, the first "normal" exoplanet that can be studied in great detail. This planet has the size of Jupiter and an orbit similar to that of Mercury. It orbits a star similar to the sun located 1500 light-years away from Earth towards the constellation of Serpens (the Snake). Like our own giant planets, Jupiter and Saturn, the planet is mostly made of hydrogen and helium.
(Image: © ESO/L. Calçada)

An alien planet recently found orbiting another star has thepotential to host water in its atmosphere, scientists say.

The suspected temperate nature of the planet ? whose surfacetemperature is somewhere between minus 4 and plus 360 degrees Fahrenheit (minus 20and plus 160 degrees Celsius) ? could mean that it it could have liquid water.

But this water wouldn't be in the form of Earth-like oceans,more likely it would be only in the form of clouds with water droplets, saidTristan Guillot, a member of the team that discovered the planet.

Astronomers announced the discovery of the planet, dubbed CoRoT-9b,last week, when they described it as a Jupiter-sized world that orbits itsparent star at about the orbit of Mercury in our solar system.

This distance, while it seems close to the star, isconsiderably further out than many other known Jupiter-sized exoplanets,which means that CoRoT-9b likely escapes the wild temperature extremesexperienced by those planets. [Weird Alien Planets Gallery]

Such an example of this can be seen in our own solar system,again on Jupiter.

"The same is true for Jupiter, which actually has waterclouds, but they're hidden from view in the deep atmosphere," Guillot toldSPACE.com in an e-mail.

Water oceans are out of the question because gas giantplanets "don't have any surface: one goes continuously from the atmosphereto a progressively denser environment in the interior," Guillot said.

The interior of the planet would look something like this:

?"In the very deep interior, there may be a core madeof water compressed to extremely high pressures (10 million times theatmospheric pressure and more) and temperatures [of about] 30,000 Kelvins (orCelsius) [54,000 degrees Fahrenheit]; water is then expected to become aionized plasma, behaving a bit like a liquid," Guillot explained. "Butcalling it an ocean would be far-stretched."

Another possibility for water in this new planetary systemwould be the presence of a moon.

If the temperatures at CoRoT-9b's orbit are in the rightrange, an ice-ball moon could exist, like Saturn's moon Titan, or possibly evena moon with liquid oceans.

"Titan-like moons with dense atmospheres and liquidwater on the surface may exist there," said Hans Deeg, another member ofthe team that discovered the planet.