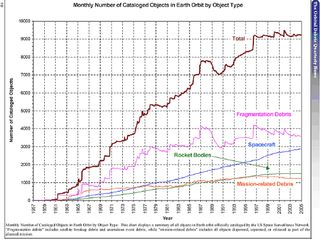 CAPE CANAVERAL - Tiny rocks, paint flecks and other fragments of junk whizzing around the Earth pose the greatest threat to the shuttles and the astronauts on board, according to the preliminary results of a new NASA risk study.

Engineers and scientists long have known the stuff pounding the shuttle as it flies through space can do catastrophic damage. Until now, few put space debris on the same level as the dangers seen during the shuttle's treacherous launch or its fiery plunge back through the atmosphere to land.

The internal risk assessment, still under review by the agency's experts, says space debris hitting different parts of the orbiter accounts for 11 of the 20 problems most likely to cause the loss of another shuttle and crew. Overall, space debris accounts for half of the catastrophic risk on any flight.

NASA would not comment on the study, saying it is incomplete. The agency also would not permit interviews with people who've worked for more than

five years on the study, even though the officials have made multiple presentations about the preliminary results at industry events.

"We don't comment on things that are not done," said Melissa Mathews, a spokeswoman at the agency's headquarters in Washington.

NASA is taking action, however, to protect the shuttles and astronaut crews. In response to concerns raised by the Columbia Accident Investigation Board, shuttle managers are expanding steps they've always taken to shield the orbiter's most vulnerable parts as best as they can.The shuttle will continue to orbit, as much as possible, in a backward position that keeps delicate parts such as its heat shield and windows guarded against direct impacts.

One new tactic will be, after the shuttle docks at the International Space Station, flipping the two connected spacecraft around so the better-armored station shields the orbiter. New in-space shuttle inspections also will help detect debris damage.

As heat shield tiles wear out, Kennedy Space Center workers are replacing them with sturdier ones. Debris-detecting sensors now being installed in the front edges of the shuttle's wings could someday also be added to cover more of the heat shield.

"It's a serious threat, but they're doing a lot of things to reduce the risk. They're flying evasive maneuvers all the time with the shuttle," said Patricia Rieff of the Rice University's Space Institute.

The U.S. military tracks about 9,000 big pieces of debris orbiting the Earth. Small pieces, such as micrometeorites or paint specks chipped off old rocket segments or satellites, can't be seen. The shuttle and the debris are zipping around the Earth as fast as six miles per second, making collisions with even the tiniest fragments potentially lethal.

The Air Force warns Houston's mission control if something big is headed at the orbiter. That gives a shuttle commander time to maneuver out of the way.

Smaller debris regularly hits the orbiter. Something half the size of what the military tracks can punch a hole in the hull or the heat shield. Pieces far smaller -- say, the size of a dime -- can chip or crack windows or, worse, rip through a spacewalking astronaut's spacesuit.

In 1997, the National Research Council warned the shuttle program to devote more attention to the danger.

"NASA appears to have put much less effort into understanding and reducing the risk than other comparable risks (such as the risk of catastrophic failure of the space shuttle main engine)," the report said. The authors, who included former astronauts and space vehicle engineers, recommended NASA do more to study the risk, avoid it and strengthen the orbiter.

The 2003 shuttle risk assessment is the first to incorporate the threat from orbital debris. The results: the likelihood of space junk bringing down the shuttle is far greater than widely feared failures of the powerful main engines, explosive solid rocket boosters or brittle heat-shield components.The new assessment indicates about half of the risk of disaster on any given shuttle mission involves space debris hitting the orbiter and, consequently, damaging some component needed to keep the crew alive in space or safely return them to the Earth.

Past risk assessments attributed most risk to thousands of possible mishaps during the first nine minutes of a flight: the fraction of time it takes to go from a standstill on the launch pad to the 20,000-plus mph necessary to escape the grip of Earth's gravity.

This study says space debris hits on different spots on the wing flaps are the two most likely catastrophic failures. Damage could render an elevon, or wing flap, unable to steer and slow the orbiter as it plummets through the atmosphere. Without them, the orbiter could burn up, rip apart or veer far off the planned landing course. Ten other space debris failure modes involve space junk damaging the heat shield.

Investigators initially suspected orbital debris might have caused Columbia's destruction. Forensic evidence later showed the shuttle burned up because of a hole in its heat shield in the same spot where a piece of foam insulation slammed into the wing during the shuttle's launch.

Still, the possibility alarmed the investigators enough to recommend that NASA make the shuttle at least as safe as the International Space Station when it comes to surviving hits by space junk. NASA correctly points out, however, that the station was built to higher standards because it is more exposed. It stays in space permanently compared with the relatively small number of days that shuttles are in space in a given year.

NASA says it's trying to decrease the odds of a space debris disaster from about 1 in 200 to 1 in 600. Achieving the same strength as the space station is not likely. The changes necessary wouldn't be finished before the shuttle's planned retirement in 2010.