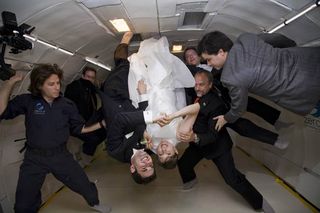 Noah Fulmor and Erin Finnegan float upside down while performing their marraige ceremony onboard the Zero-G plane. Photo courtesy ZERO-G and Steve Boxall

Noah Fulmor and Erin Finnegan said"I do" June 20 while floating in microgravity in an airplaneconverted for commercial weightless flights.

The vows took place in front of close family and friendsaboard a modified Boeing 727-200 plane owned by the Zero Gravity Corp. Theplane - which is filled with padded walls and floors for safety, and videocameras to record the experience -  took off from NASA?s Kennedy SpaceCenter at Cape Canaveral, Fla. It made steep dives while airborne to give thebridal party eight full minutes ofweightlessness spread out in increments of about 30 seconds each.

The couple paid $5,400 per person for themselves and 10guests to take the ride. The ceremony was officiated by spacetourist Richard Garriott, the son of former NASA astronaut Owen Garriott,who flew to the International Space Station last year in a $30 million deal brokeredby the company Space Adventures.

"I am honored to be taking part in Erin and Noah?swedding," Garriott said. "I know firsthand the added thrillmicrogravity will play in their already joyous event. The excitement from these?first ever microgravity nuptials? will not soon fade in the minds of all themembers of the wedding party."

Saturday?s weightless nuptials were not the firstspace-themed wedding. In 2003, Russian cosmonaut Yuri Malenchenko got married fromorbit while flying aboard the International Space Station.

But only Malenchenko was floating in weightlessness duringthe ceremony, which he participated in via video. His bride, Ekaterina, was atNASA?s Johnson Space Center in Houston.