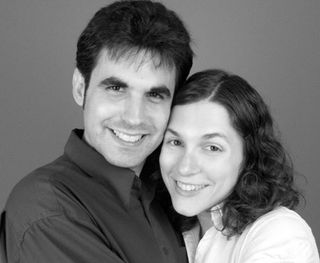 The first weightless wedding is set to take place thismonth.

The couple, lifelong space fanswho both dreamed of becoming astronauts, will exchange rings and vows in frontof their closest family and friends aboard a modified Boeing 727-200 plane owned by the Zero Gravity Corp.The plane will depart from Kennedy Space Center atCape Canaveral, Fla., and make steep dives while airborne to give the passengerseight fullminutes of weightlessness, just as astronauts experience while flying inspace.

"Noah kept saying hewanted to getmarried in space," Finnegan wrote on the couple's blog,ZeroGravityWedding.com. "We probably won?t be able to afford to go tospace for at least another 25 to 50 years (maybe for our anniversary?) so whenthe Zero G plane opened to the public, I suggested we get married on one oftheir flights as a compromise."

Space touristRichard Garriott, who flew to the International Space Station last yearthrough a deal brokered by the company Space Adventures, will officiate theceremony.

The bride will wear a dressspecially designed for microgravity (underneath the skirt are pants) byJapanese designer Eri Matsui. The groom plans to don a custom made tuxedo by J.Lucas Clothiers with tails crafted specifically to take advantage of zerogravity conditions.

The bride and groom will even exchange special ringsdesigned by jeweler Chris Ploof made with pieces of metal from the Gibeon meteorite,a space rock made of an iron-nickel alloy that fell in prehistoric times inNamibia.

The couple paid $5,400 per personfor themselves and 10 guests to take the ride, though some guests are payingpart of their own tickets.

"Noah and I are throwing a lot of money at our crazywedding because private space travel is a cause we really believe in,"Finnegan wrote. "We really think the future is space, and that privatecitizens ought to be able to travel there. We want to promote space travel as apositive thing."

In 2003 Russian cosmonaut YuriMalenchenko got married in space while he was flying aboard the InternationalSpace Station. The ceremony was conducted via video, because the bride was backon Earth at the Johnson Space Center in Houston. Fulmor and Finnegan are set to become the first two people to be marriedin a weightless environment.

After the short ceremony, the newlyweds will land and meetguests waiting on the ground, including the bride's mother, who declined toexperience microgravity. Fulmor and Finnegan are hopingto recruit one more guest who can pay for at least half of his or her ownticket. Interested parties can contact them at noahanderin@gmail.com.

The couple is holding a launch party and press conference,which is open to the public, Tuesday at 7:00 pm at the Kush Lounge in New YorkCity.