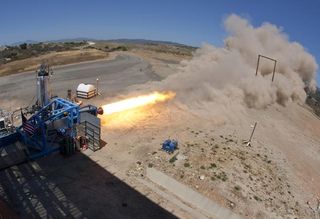 Thislatest series of tests in the California desert follows flight tests forSpaceShipTwo's carrier aircraft WhiteKnightTwo, dubbed "Eve." The Evemother ship ended up with a slightding on its tail in April during what was then its longest test run yet.

SpaceShipTwois designed to carry eight people — six passengers and two pilots — intosuborbital space and back for about $200,000 a ticket

Unliketypical rockets, SpaceShipTwo would ride into the upperatmosphere under Eve's wing before igniting its own rocket engine to makethe final ascent into space. That means the rocket motor only needs to burn fora short time period.

"Thismeans much less fuel is required — fuel which provides none of the toxins thatare present in the solid rockets used by the space shuttle and satellitelaunches," Branson noted.

Headded that the spaceship's carbon footprint for each of its passengers and crewwould be just a quarter of that for a return trip from London to New York.

Thehybrid nitrous oxide motor represents the largest of its kind in the world,designed by Virgin Galactic supplier Scaled Composites and its subcontractorSNC (Sierra Nevada Corporation). Safety features include the capability to shutdown the system at any time, and permit the spaceship to glide back down for aconventional runway landing.

VirginGalactic has already lined up $40million and 300 people on its waiting lists for space tourism flights.They'll have to keep waiting for now, as flight testing for SpaceShipTwo isscheduled for later this year.