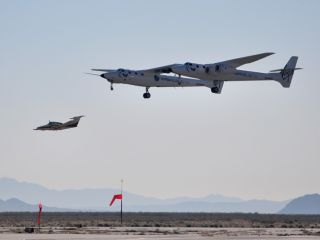 Richard Branson's Virgin Group has collected $40 million and has 300 people on the waiting list for tourist flights into space. Not a bad business for an airline that isn't even a spaceline yet.

In an interview with Reuters, Will Whitehorn, president of Virgin Galactic (an ambitious name, considering that NASA hasn't even managed to get back to the Moon yet) is already looking beyond plain ol' space tourism.

Of course, there's lots of work to do first. The two-craft setup intended to loft the first tourists up there is still in the test phase (and the mothership suffered a little ding in the most recent test flight).

The WhiteKnightTwo carrier aircraft, flying out of the Mojave Air and Space Port in California, made its longest test flight to date, four hours, but pitched up a little steep in some tricky winds at landing. The attachable plane that will go to space, called SpaceShipTwo, was not involved.

"We are delighted with the program so far and are meeting every milestone we are setting," Whitehorn told SPACE.com after the minor mishap last month. "Sir Richard Branson is looking forward to flying in Eve this summer and then seeing SpaceShipTwo attached later in the year."

Meanwhile Whitehorn, backed by Branson's billions, told Reuters he is looking ahead to opportunities as wide-ranging as conducting science in space (perhaps obviating the need for the international space station), setting up cosmic computer server farms, and replacing long-haul airline flights by going into the air-free zone to zip around the planet. Other big questions remain, such as whether coffee can be served in that zero-g environment.