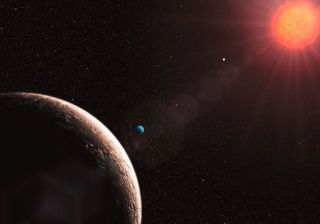 Planets are like insurance premiums: smaller is usuallybetter. But better worlds are in short supply.

As I write this, a total of 347 exoplanets — worldsorbiting other stars — have been reported in the scientific literature.? Thisroster is expanding at roughly one planet a week, and it?s a decidedly beefycrowd.? Many exoplanets are comparable in massto Jupiter, and the biggest is nearly eight thousand times as hefty asEarth. Such bulky orbs are likely to be wrapped in thick, malodorousatmospheres: hardly the type of place that ET would be pleased to call home.

But what about those smaller, better worlds, at thebottom of the heap?? Are there any lightweights among the exoplanet crowd?

Well, there?s Gliese581e, which weighs in at a mere 1.9 times the tonnage of Earth, and is theleast massive exoplanet known to circle an ordinary star.? If the density ofthis planet is similar to that of terra firma, then its diameter is a mere 24%greater than the world under your feet.

Last month?s discovery of Gliese 581e was a big deal.?News stories lead with the titillating tidbit that, based on its size, thisplanet could be a sibling of Earth, hinting that it might be suitable forlife.? Buried about five paragraphs into the text was the less cheering factthat Gliese 581e orbits only 3 million miles from its home star. Admittedly,that sun is far fainter than our own, but given this planet?s proximity Gliese581e will be baked in starlight as strong as that which shines on Venus. It?snot Shangri La.

Gliese 581e is no cousin of Earth.? But there?s a raceunderway to find suchcousins, and a winner may cross the finish line in the next thousand days.

If that happens, kudos should go to new instruments — forexample, HARPS.? That sounds like a music club for angels, but the HighAccuracy Radial velocity Planet Searcher is in fact a spectrograph mounted onthe 3.6 m telescope at the European Southern Observatory in Chile.? HARPS isable to sense stellar wobbles with stunning accuracy, and is the device thatuncovered Gliese 581e.? Back in 1995, when astronomers grabbed headlines withthe discovery of a planet around the star 51 Pegasi, they were able to measurea star?s back-and-forth shaking to within 5 meters per second, or roughly thespeed of a bicycle. Today, HARPS can easily perceive shakes as small as 1 meterper second, and is approaching an accuracy of one-third that speed.?Eventually, it might reach 10 cm per second, or the pace of an ant.? Forcomparison, the Sun?s wobble due to Earth is about 3 cm per second.

While wobble-watching experiments are already out of thegate and down the track, the favorite in the exoplanet horse race is NASA?s Keplermission, which just began its four-year reconnaissance for small worlds.Kepler?s designers expect the telescope to eventually find dozens of Earth?sdoppelgangers — planets that are not merely the same size as our own, butin orbits that would grace them with salubrious temperatures: in other words,worlds that could boast of thick atmospheres and watery oceans.

The bottom line is that the discovery of a true analog toEarth is so close; researchers already feel its hot breath.? But if such aplanet is found, will the public care?

Gauging from the enthusiasm that greeted the discovery ofGliese 581e, the answer is emphatically yes.? My in-box will be flooded withemails urging that our SETI experiments target the new world, and of coursewe?ll do that.? But keep this in mind: a single Earth-like planet (or evenseveral dozen) is like a single kiss ? it?s not enough.? Terra firma has beenaround for 4.6 billion years, but life clever enough to transmit signals intospace has been walking Earth?s surface for less than a century.? If you?resanguine enough to believe that we?ll continue to be technologically proficientfor another 10 thousand years, then the fraction of our planet?s lifetimeduring which someone was ?on the air? on Earth will have been no more than twoparts in a million.

If this estimate is even roughly typical of other worlds,then we?ll need to aim our radio antennas in the directions of 500 thousandEarth-like planets to have a decent chance of hearing anyone.? That may sounddaunting, but new instruments — such as the Allen Telescope Array — can pullthat off in two decades? time, if Earth-like worlds are common.

The data that will tell us whether that latter assumptionis true — and thereby answer a question as old as upright hominids — arerushing our way.

Shostak is author of ?Confessions of an AlienHunter?