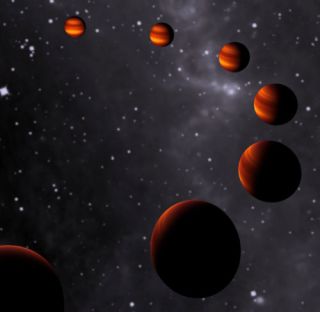 In this artist depiction, CoRoT-1b can be seen in several phases as it orbits its sun. Because the planet is tidally locked, it has a permanent dayside and nightside.
(Image: © Leiden University)

For the firsttime, astronomers have observed the phases of an extrasolar planet in visiblelight, as the world orbits around its star.

The planet,CoRoT-1b, was the first planet discovered by the French CoRoT(Convection Rotation and Planetary Transit) satellite about 2.5 years ago. It isabout 1,600 light years away in the constellation Monoceros.

CoRoT-1b is aso-called "hotJupiter." These planets are the size of Jupiter but orbit very closelyto their stars (CoRoT-1b orbits its star in just 36 hours). Hot Jupiters areexpected to be tidallylocked, with one side always facing their stars, the other permanently dark(our own moon is tidally locked with the Earth, only showing its "nearside" to us).

If theseplanets do have permanent daysides and nightsides, astronomers expect to seevery large temperatures differences between the two hemispheres, depending onwhich one was in view from Earth's vantage point.

Astronomershad taken infrared measurements of these light and dark phases, but theCoRoT-1b measurements mark the first time they have been seen in the opticalwavelengths, and they show that the nightside of the planet is completely dark,while the dayside is strongly heated by the star up to about 3,600 degrees Fahrenheit(2,000 degrees Celsius).

"So wesee a very large difference between the dayside and the nightside," saidstudy author Ignas Snellen of Leiden University in the Netherlands.

The measuredeffect is very much like the changing phases of objects in our own solarsystem, such as Earth's moon, when the sun shines on the moon from differentdirections while the moon revolves around the Earth. Although in the case ofour moon this is reflected sun-light, while for CoRoT-1b it is probably heatradiation.

Theobservations, detailed in the May 28 issue of the journal Nature, alsoshed light on the atmosphere of the exoplanet and suggest that there is not alot of transfer of heat from the dayside to the nightside of the planet.Another observed exoplanet had less of a heat difference between its two sides,suggesting that wind was transporting the incoming solar energy, but "forthis planet, that is apparently not the case," Snellen told SPACE.com.

Instead,CoRoT-1b may have certain molecules in its atmosphere that absorb and re-radiatethe light coming from the star on the dayside before that energy can betransferred to the other side of the planet.

Opticalobservations can also tell astronomers whether or not any of the light they areseeing is reflected starlight, which would suggest the exoplanet had clouds.Unfortunately, the researchers could not tell if any of the light from CoRoT-1bwas reflected, Snellen said.

To determinewhether or not the light is reflected, the astronomers will need observationsof the planet at multiple wavelengths, Snellen said.

Snellen andhis colleagues have already started to look at observations of other exoplanetsto glean more information on the phases and atmospheres of hot Jupiters.