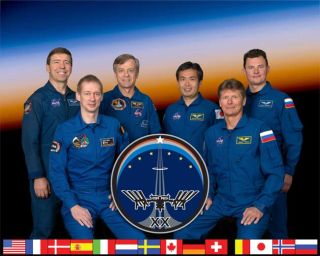 After a decade of construction, the International SpaceStation will finally live up to its name this week when the first six-personcrew takes up residence with astronauts from five different countries.

The second half of the station's inauguralsix-member crew is poised to launch Wednesday at 6:34 a.m. EDT (1034 GMT)aboard a Russian Soyuz rocket from Kazakhstan's Baikonur Cosmodrome. They willarrive on Friday to join the first wave of their crew already aboard thestation.

When the new Soyuz crew joins the three astronauts alreadywaiting on theorbiting laboratory, it will be the first time, ever, ?that all five of thestation's international partner agencies (NASA, the Russian Federal SpaceAgency (Roscosmos), the Japan Aerospace Exploration Agency (JAXA), the EuropeanSpace Agency (ESA) and the Canadian Space Agency (CSA)) ? will be representedon orbit at once. It?s fitting the cosmic line-up coincided with the station?sfirst six-person crew.

"At this time we will have Canadian, Russian, American,European and Japanese guy on board space station, and I would say it?s [an]outstanding event," Expedition 20 space station commander GennadyPadalka, a Russian cosmonaut, said in a preflight interview. "You knowthat all these countries have been participating in ISS project for 10 years asa minimum, and now it?s pretty high time to have all these astronauts andcosmonauts together working in space."

Construction on the International Space Station began in1998, with the first three-man tenants setting up shop in 2000, once livingquarters arrived. Today, the station is home to Padalka, American astronautMichael Barratt and Japanese astronaut Koichi Wakata.

"When we all get together at the table we will see thatwe are people from all corners of the world, working together as a single teamto execute our mission program, and I want to believe that we will be able tofind a common language and that we will all be happy to be part of thisfamily," Romanenko said in a NASA interview.

The astronauts will have more to drink at their dinnertable. Last week, the station crew officially began consuming water recycledfrom their own urine and sweat, part of vital life support gear designed specificallyto support a full six-person crew.

Romanenko, a former Russian air force pilot, will be makinghis first trip to space after joining the Russian Space Agency in 1997. He ismarried and has one son.

De Winne is a former test pilot for the Belgian air force,and joined ESA in 2000. He is married and has three children. De Winne is aveteran of a 2002 Soyuz trip to the space station and is set to assume commandof the Expedition 21 mission after Padalka flies home in October. When he takesthe helm he will become the first European station commander.

Thirsk was a medical doctor before he joined the CSA in1983. In 1996 he flew on the space shuttle science mission STS-78, which wasdevoted to materials and life science research. He is Canada?s firstlong-duration astronaut.

Padalka, Barratt and Wakata on the station now are currentlyserving as the station?s Expedition 19 crew. They will shift to Expedition 20,with Padalka still in charge, when their new crewmates arrive Friday.

"I think for us to expand our frontiers in space,international cooperation is essential," Wakata said in a preflightinterview. "The ISS project has demonstrated that it's possible."

The members of the double-sized crew will have their workcut out for them, with a full schedule of research and space stationmaintenance planned. The international nature of the crew should also providesome fun chances for cross-cultural learning.

"We look at each other as much more as colleagues thanambassadors but at the same time we?re well aware that we represent nations andagencies and we want to serve the best interests of all of those as well,"Barratt said in an interview before his flight. "We enjoy one another?sfood and company and we just have a great time together."

The astronauts are prepared for some wrangling to take placeas they try to adjust to a more crowded space station than they've been usedto.

"The ground is doing a great job, and they try to takeinto account on all details, and they try to envisage all problems,"Padalka said. "But at the same time we are ready to put up with sometiny problems and ready to work with the ground as one team to resolve them."

With the start of large crews, the space station is enteringa new phase where spaceflyers hope to move beyond the basics of building thestation, which has been the focus of most missions so far.

A major goal of the Expedition 20 mission is to "helptransition the space station program from a phase that has been dominated byassembly, to one of utilization to help the station fulfill its newresponsibility as a world-class facility for doing research anddevelopment," Thirsk said.

And if the space station starts to feel crowded when thefirst six-person crew arrives, wait till the space shuttle Endeavour visitsduring its June STS-127 flight.

"If you consider that the permanent crew will be six, avisiting shuttle will be seven, now we?ll have up to 13 on the spacestation," Barratt said. "As far as I know, that?s the most we?veever had on a single platform in space in history, so we?ll look forward toseeing how all that works."