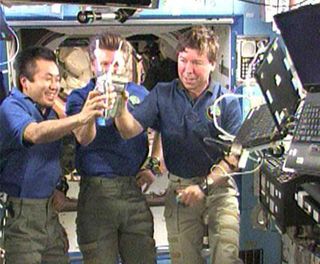 The Expedition 19 crew participates in a toast aboard the International Space Station.
(Image: © NASA TV)

Astronauts took a swig of recycled urine water to toast theirsuccessful testing of the wastewater recycling system on the InternationalSpace Station.

U.S. astronaut Michael Barratt called drinking the recycledwater the stuff of sciencefiction, and cracked several jokes during the inauguration of the systemknown as ECLSS.

"We have these highly attractive labels on our waterbags that essentially say 'brought to you by ECLSS,' and 'drink when real wateris over 200 miles away,'" Barratt said.

The water recycling system cost about $250 million and willbe used daily to recycle urine and wastewater back into potable water suitablefor drinking, food preparation, bathing and oxygen generation. The system hasbeen used in the station?s U.S. built oxygen generator, which uses electrolysisto separate water into oxygen and hydrogen, since November.

"We have completely checked out the system from end toend,? said Marybeth Edeen, a JSC manager who led the development of the spacestation gear needed to support a full six-person crew.

A seriesof glitches and malfunctionsin the new space gizmo have prevented astronauts from using it since itlaunched last November with the space shuttle Endeavour's STS-126 mission.

Today astronaut Don Pettit spoke with the space station crewfrom Houston, as part of the STS-126 crew celebrating the overdue inaugurationof the recycler. He also apologized for not leaving his homemade zero-gcoffee cup.

"We're getting ready to toast with some of yesterday'scoffee with you guys," Pettit said.

That prompted a tongue-in-cheek reply from the spacestation.

"We're going to be drinking yesterday's coffeefrequently up here, and happy to do it," Barratt replied.

A round of "Cheers!" was followed by theastronauts "clinking" together giant water pouches, before eachgrabbed a sip from their straws. The crew toasted twice, once for MissionControl and once for Marshall.

"Gennady's showing it's perfectly clear and worthchasing in zero-g," Barratt noted as the Russian cosmonaut closed in on anescaping water drop.

Wakata thanked everyone for the "real teamwork thatmade it possible to drink this recycled water." His sentiments were widelyshared.

"It was wonderful," Edeen told SPACE.comfollowing the toast. ?It really is the culmination of maybe a decade of work tomake this happen."