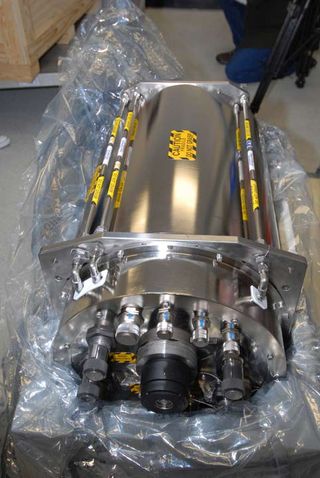 A closeup of the replacement distillation assembly for the International Space Station's new water recycling system being checked out in the Space Station Processing Facility at NASA's Kennedy Space Center in Florida. The unit will be flown to the station aboard space shuttle Discovery on the STS-119 mission. Photo
(Image: © NASA/Jack Pfaller)

CAPE CANAVERAL, Fla. — Tucked away with the new hardware set to launch into space aboard NASA's shuttle Discovery on Wednesday night is a desperately-needed spare part for the International Space Station's urine recycler.

The urine recycling system, which was first delivered to the International Space Station (ISS) last November by the shuttle Endeavour, has been malfunctioning since it was installed. Though the technology may sound icky, it is considered vital for the space station to accommodate crews of six astronauts, double its current occupancy of three.

"It is a priority to get it on orbit, installed, and get the urine processing facility back hopefully functioning and working," Discovery's payload manager, Robby Ashley, said in a Tuesday briefing here at NASA's Kennedy Space Center. "And as well, it's important that we get the failed unit that's on orbit now back down on the ground so we can continue with our failure investigation."

Discovery is poised to launch Wednesday evening at 9:20 p.m. EDT (0120 March 12 GMT) from a seaside launch pad at the Kennedy Space Center to deliver new U.S. solar arrays to the space station. The new component for the urine recycler, a roughly 180-pound (82-kg) "distillation assembly," is already packed tight into the shuttle's mid-deck storage area.

The distillation assembly contains a motor-driven centrifuge that helps prepare urine for recycling. Soon after the machine was put into place it started acting up, and a series of on-orbit repairs failed to permanently fix the problem. Mission managers hope replacing the faulty element with a spare will get the urine recycler back on its feet by May, when the expanded crew shifts are set to begin.

"We're lucky that the shuttle is coming up soon to bring us a good distillation assembly," space station commander Michael Fincke said in a recent televised interview.

The urine recycler is part of a larger system is designed to collect astronauts' urine, sweat and other liquids, and filter it back into potable water through a seven-step process. The final product is fresh water for drinking, food preparation, bathing and oxygen generation.

Being able to recycle these fluids into usable water is essential to host larger crews on the space station because it reduces the amount of heavy fresh water that must be toted up on spacecraft.

Fincke said the other parts of the recycling system that convert astronaut sweat and other wastewater back into drinking water have been working fine. Without the urine processor, the space station could likely support a six-person crew as long as NASA's space shuttles -which produce water as a fuel cell byproduct - continue to visit the orbiting lab, he added. But NASA currently plans to retire its three-shuttle fleet in 2010.

"This is exactly why it's good to have the space station to try these things out, rather than trying them for the first time on the moon," Fincke said. "This way, we can figure out all the little tricks and gotchas, and perfect the technology, and then we can go farther away from home."