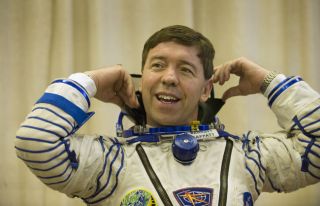 He may notbe zooming through space at warp speed on the Starship Enterprise, but astronautMichael Barratt is the closest thing to a real-life Dr. McCoy aboard theInternational Space Station.

Thedoctor-turned-astronaut is spending more than half a year living 220 miles (354km) above Earth as the space station?s chief medical officer. Barratt said thestation?s small medical suite is adequate, but is likely far less glitzy than theone used by Dr. Leonard McCoy, the chief medical officer of the fictional starshipU.S.S. Enterprise in the ?StarTrek? television series and films, the latest of whichopens in theaters on May 8.

?It?s notquite Dr. McCoy?s sick bay, but it pretty much has what we would need torespond to the most common and most likely things here,? Barratt said in arecent televised interview. ?We haven?t really had anything major on station,so I think we?re pretty ready.?

Barrattshould be ready. He literally helped write the textbook on spaceflight medicine- ?Principles of Clinical Medicine for Space Flight? - and is the associateeditor for space medicine for the journal Aviation, Space and EnvironmentalMedicine.

A veteran mountaineer and diver, Barratt spent nine years as a ground-based NASAmedical officer and flight surgeon before deciding he wanted to experience theeffects of spaceflight for himself. Space medicine, after all, includes theeffects of high altitude and pressure on the human body, he added.

?I think Ican perhaps do a little bit more good for my field of space medicine byexperiencing it myself,? Barratt said.

Aboard thespace station, Barratt may not have McCoy?s fancy equipmentfrom the 23rd century, but he does have the right gear to treat scrapes,cuts and even broken bones, though the latter has never been needed, he said.If an emergency comes up that he may not have the tools for, Barratt said hecan always call on a team of doctors in Mission Control.

?The forces that break bones, we don?t have them up here. They tend to comefrom gravity and collisions,? Barratt said. ?You?d have to do something verysevere and deliberate to break an arm up here.?

Bone healthand density is of vital importance for astronauts in space. Barratt and his twocrewmates - Russian commander Gennady Padalka and Japanese flight engineerKoichi Wakata - exercise two hours ever day to preserve muscle and bonestrength during the long months of weightlessness. They?re also studyingmedical countermeasures that could reduce the loss of bone density while inspace.

?We?retesting an osteoporosis medicine that is used on the ground to see if works onthe space station,? Wakata said in a recent interview.

WhileBarratt, like ?Star Trek?s? McCoy, is a dedicated and veteran physician, thereare some key differences between the real-life space medic and his fictional predecessor.

Barrattjoined NASA?s astronaut ranks in 2000 after nearly a decade servicing as aflight surgeon for pilots and astronauts. He was 41 at the time, but had towait nine more years before getting a post aboard the International SpaceStation. Barratt launched to the space station in late March and celebrated his50th birthday in orbit last month.

In hisofficial ?Star Trek? biography, Dr. Leonard McCoy won?t be born for another 218years (in 2227), but he will receive his chief medical officer post aboardEnterprise at age 39 (in 2266). Enterprise captain James Kirk gave McCoy thenicknames ?Bones? and the space doctor developed an ongoing rivalry with Spock,the ship?s half-Vulcan/half-human science officer.? Barratt?s middle name isReed and he serves as both the station?s medical officer and NASA scienceofficer.

Barrattexpects his mission aboard the space station to last about seven months, duringwhich time he will live without gravity. McCoy served on the Enterprise?sinitial five-year mission, but had the luxury of artificial gravity.

McCoy wasalso divorced and had one daughter. Barratt is marriedand has five children. His wife Michelle and children watched him launchinto space aboard a Russian Soyuz spacecraft in late March.

Barrattalso has a reputation as a great cook, and routinely whipped up meals for hiscrewmates as they trained for launch, Wakata told reporters. There is also somecomfort, he added, in having a trained physician in space watching over thestation crew?s health.

?Having amedical doctor on board really makes me feel relaxed,? Wakata said.