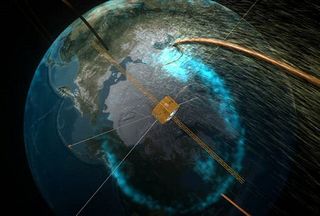 This artist's concept shows a magnetic portal connecting Earth's magnetic field connecting to the sun's. The spacecraft is on hand to measure the high-energy particles and fields flowing through the portal.
(Image: © NASA)

Like giant, cosmic chutes between the Earth and sun, magnetic portals open up every eight minutes or so to connect our planet with its host star.

Once the portals open, loads of high-energy particles can travel the 93 million miles (150 million km) through the conduit during its brief opening, space scientists say.

Called a flux transfer event, or FTE, such cosmic connections not only exist but are possibly twice as common as anyone ever imagined, according to space scientists who attended the 2008 Plasma Workshop in Huntsville, Ala., last week.

"Ten years ago I was pretty sure they didn't exist, but now the evidence is incontrovertible," said David Sibeck, an astrophysicist at the Goddard Space Flight Center in Maryland.

Researchers have long known that the Earth and sun must be connected. For instance,particles from the sun are constantly whisked away via the solar wind and often follow magnetic field lines that connect the sun's atmosphere with terra firma. The field lines allow particles to penetrate Earth's magnetosphere, the magnetic bubble that surrounds our planet.

"We used to think the connection was permanent and that solar wind could trickleinto the near-Earth environment anytime the wind was active," Sibeck said. "We were wrong. The connections are not steady at all. They are often brief, bursty and very dynamic."

Several speakers at the workshop outlined the formation of a flux transfer event. Oneidea is that on the side of Earth facing the sun, our magnetic field presses against the sun's magnetic field. And about every eight minutes, the two fields briefly reconnect,forming a portal through which particles can flow. The portal takes the form of a magnetic cylinder about as wide as Earth.

Sibeck said to think of the FTE as a giant rolling pin that lies flat along the boundary between the Earth's and sun's magnetic fields. (He noted the rolling pin would have to be malleable so it could pierce through both magnetic fields while lying flat.)

"These FTEs kind of look like roller pins, and they form as little blob roller pins atthe tip of the magnetosphere facing the sun," Sibeck told SPACE.com."They can't decide which way they're going to slide around the Earth, so they grow there into big roller pins and then they take off and sort of spirally roll along [Earth's magnetosphere] like you're pounding out dough."

More than one FTE can form at once, he said, and they stay open for about 15 to 20 minutes.

In order to measure such FTEs, spacecraft must not only catch them forming but also be oneither end of the magnetic structures (either lengthwise or widthwise). In fact, the European Space Agency's fleet of four Cluster spacecraft and NASA's five THEMIS probes have flown through and surrounded these cylinders, measuring their dimensions and sensing the particles that shoot through, Sibeck said. While these measurements have nailed down the width of an FTE, the length is still uncertain though one measurement put it at up to five Earth radii. One Earth radius is about 4,000 miles (6,400 kilometers).

Astrophysicist Jimmy Raeder of the University of New Hampshire used those measurements to develop computer simulations of the portals. He found the cylindrical portals tend to form above Earth's equator and then in December, the FTEs would roll over the North Pole. In July, they roll over the South Pole.

When the magnetic cylinders are active, they allow particles to flow through rather easily, forming important conduits of energy for Earth's magnetosphere, Sibeck said. When passive, the cylinders have more resistance to transiting particles.The internal structure of a passive cylinder makes it tougher for particles and magnetic fields to flow through. Sibeck has calculated the properties of passive FTEs and hopes he and his colleagues will hunt for signs of them in data collected with THEMIS and Cluster.

The space scientists at the workshop still want to figure out why the portals form every eight minutes and how magnetic fields inside the cylinders twist and coil.