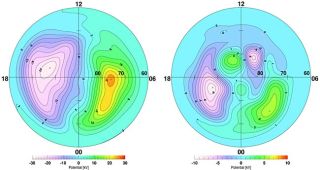 The pattern of convection cells, or plasma-filled bubbles residing within Earth's magnetosphere, high above the Earth's polar caps. Different colors represent different convective motions of the plasma. To the right is a statistical map of the north pole's convection cells patterns; to the left is the south pole's.
(Image: © S. Haaland, Max-Planck-Institut fuer extraterrestrische Physik)

Enormousbubbles of plasma trapped within Earth?s magnetic fields have been fully mappedfor the first time.

Scientistsnow think the bubbles of ionized gas, called convection cells, are stronglyaffected by pummeling from the sun's solar wind. Future observations of thecells could be used to monitor violent solar outbursts, such as solar flaresand coronal mass ejections, which can harm satellites or astronauts in space.

?Theresults are a great achievement," said Philippe Escoubet, the European SpaceAgency (ESA) project scientist for the experiments aboard the Cluster satellites.

SteinHaaland, a scientist at the Max Planck Institute in Germany,and his team used six years of data gathered by the four spacecraft tocreate the maps. "They show data collected over years is helping deepenour understanding of the Sun-Earth connection,? Escoubet said.

Convectioncells exist high above Earth's polar caps and are made of plasma, which iselectron-stripped gas that is highly erratic. Earth's magnetosphere andatmosphere shelter the planet from high-energy solar particles, but theprotective shells form an incomplete cocoon—so some of the radiation leaks in,is trapped and forms convection cells.

Scientiststhink understanding how such particles are trapped is crucial to safeguardingastronauts and satellites, such as GPS and telecommunications platforms.

Haaland said the maps willinform future monitoring of convection cells. "It will be possible to mapthe region at any altitude, under any conditions with satellites, making ourtask easier," he said.

Haaland and his colleagues' work is detailed in recent issues of the journal AnnalesGeophysicae.