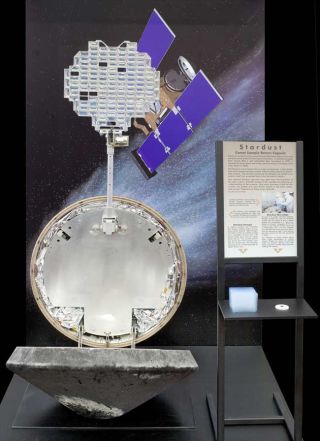 After a three billion-mile journey to rendezvous with a comet, the Stardust return capsule joins the national collection of flight icons at the National Air and Space Museum.
(Image: © Eric Long/NASM)

A NASA capsule that collected the first samples from a comethas become part of a collection itself.

"Very few people get to build something, launch it intospace, see it be successful and then get it back in their hands," saidKaren McNamara, Johnson recovery lead for the Stardust mission. "To beable to share this with the public is phenomenal."

Stardust, comprising both a spacecraft and capsule, used itstennis racket-like, aerogel-lined collector to capture particles as it camewithin 150 miles of Wild 2 in January 2004. Carrying the samples, the capsulereturned to Earth on January 15, 2006, landing in Utah. Two days later, it wastransported to a curatorial facility at NASA's Johnson Space Center in Houston.

The capsule is exhibited in the same hall as CharlesLindbergh's Spirit of St. Louis, John Glenn's Friendship 7 and the Apollo 11command module Columbia that carried the first men to walk on the moon.

"The Smithsonian Institution's National Air and Space Museum is delighted to add to the National Collection the Stardust returncapsule," said Roger Launius, senior curator of the Division of SpaceHistory. "As one of the premier space science missions of the recent past,Stardust will take its place alongside other iconic objects from the history ofair and spaceflight. I look forward to helping to impart more knowledge to ourvisitors about the makeup of the universe using this significant and path-breakingobject."

The hardware provided to the Smithsonian includes actualflight components. Elements that remain relevant to the on-goingscience goals of the mission remain with NASA.

The capsule's spacecraft, with which it flew to Wild 2, isstill in space. Having successfully completed its mission, it will visit comet9P/Tempel 1 to provide the first look at the changes to a comet's nucleusproduced after a close approach to the Sun. The new mission, dubbed StardustNExT will mark the first time a comet has been revisited. It was first visitedby the Deep Impact spacecraft on July 4, 2005.

"Usually, when a piece of your spacecraft goes into theSmithsonian that means the mission's over," said Rick Grammier,Stardust-NExT project manager at NASA's Jet Propulsion Laboratory in Pasadena,Calif. "But the Stardust spacecraft is still doing the job for NASA and inFebruary 2011, it will fly within 120 miles of the comet."

This past April, the Smithsonian awarded the National Airand Space Museum Trophy, the museum's highest honor, to the Jet PropulsionLaboratory, Lockheed Martin Space Systems, and University of Washington team that led the Stardust mission for NASA.

Preceding the capsule's display, samples of aerogel, a solidmade almost entirely of air that was used to catch the comet particles, and aflight suit worn by Stardust project manager Thomas Duxbury were exhibited withthe trophy at the museum.

Visit collectSPACE.com to see additional photos of the capsule's preparationby NASA for shipment to the National Air and Space Museum.