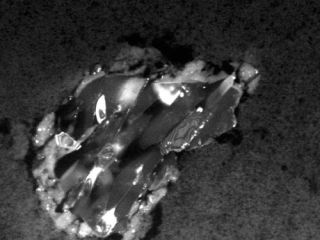 his image shows a comet particle collected by the Stardust spacecraft. The particle is made up of the silicate mineral forsterite, which can found on Earth in gemstones called peridot.
(Image: © NASA/JPL)

Pieces of acomet returned to Earth by NASA's Stardustspacecraft apparently formed near the Sun or around another star altogether beforebeing flung to the outer edges of the Solar System, mission scientists saidMonday.

Researchersstudying samples of CometWild 2 (pronounced "Vilt 2") embedded in Stardust's gel-filled collector foundthat the minerals formed under extremely high temperatures - such as those neara star - and not in the frigid cold expected at the Solar System's edge, wheremost short-term comets originate.

"In thecoldest part of the solar system we've found samples that formed at extremelyhigh temperatures," said Donald Brownlee, Stardust's principal investigator atthe University of Washington in Seattle, during a Monday press conference. "Whenthese minerals formed they were either red hot or white hot grains, and yetthey were collected in a comet, the Siberia of the Solar System."

The finding- announced on the 20th anniversary of the European probe Giotto's rendezvouswith CometHalley in 1986 - perplexed Stardust researchers and added a new wrinkle inastronomers' understanding of how comets, and possibly the Solar System,formed.

NASA'sStardust sample return capsule landedin the Utah desert on Jan. 15, 2006 after a nearly seven-year mission toretrieve comet and interstellar dust particles in an aerogelcollector. The probe swungpast the 4.5 billion-year-old Comet Wild 2 on Jan. 2, 2004.

Astronomersaren't sure whether the minerals found in Stardust's comet samples formed nearthe Sun or around another star, though isotope scans are expected determinethat for sure in upcoming tests, Brownlee said. Olivine, a mix of iron andmagnesium that appears green on some Earth beaches, is one of the severalsurprising compounds found in the Wild 2 samples, he added.

MichaelZolensky, Stardust curator and a mission co-investigator at NASA's JohnsonSpace Center (JSC), said astronomers believed that a sort of material "zoning"occurred during the Solar System's formation.

Accordingto the model, substances formed under hotter temperatures closer to the Sun,while colder materials - such as the gases that make up the giant planets -took root further out, he added.

But ifStardust's comet samples are found to be local to the Solar System, and notfrom some distant start, they'd suggest a sort of transportation system tofling particles formed near the Sun out past the orbit of Plutoand into the comet realm, researchers said.

"If thismixing is occurring, as suggested by these results, than how do you preserveany kind of zoning in the solar system," Zolenksy said. "It raises moremysteries."

Thanks tothe Stardust mission, astronomers have a wealth of comet and dust samples attheir disposal, at least 45 of which large enough to be seen with the nakedeye. But the number of actual samples could range in the millions, researcherssaid.

"We're justlearning how to handle the samples, how make the best use of them," Zolenskysaid. "Once we understand that then we'll open them up for widespread analysis.And that will go on for the rest of our lives."

Stardustresearchers said that all of the probe's 132 sample cells contain cometparticles ranging in size between 15 micrometers - less than the width of ahuman hair - down to about one micrometer, though the interstellar dust samplesare much smaller. The largest of those dust samples can reach one micrometer,they added.

"With everyday that goes by, we're able to handle smaller particles, so hopefully a yearfrom now we'll be able to handle things down to a half a micrometer," Zolenskysaid.

Mission scientistsexpect to scan Stardust's sample cells and release them to the Stardust@homeproject, an effort that allows the public to search for comet and dust samplesusing their personal computers, in a few weeks.

Researchersalso hope to pin down the origin of Comet Wild 2's high-temperature formingminerals in the next few weeks as well.