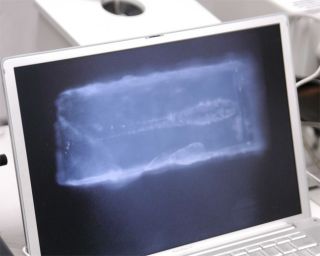 "Thepace of sample processing...removing and preparing the particles from the aerogelcells...has ramped up considerably," said Peter Tsou, Stardust Deputy PrincipalInvestigator at the Jet Propulsion Laboratory in a recent update.

Detailedscientific scrutiny of material captured during a flyby of Comet Wild 2 duringStardust's nearly seven-year long collection route through space is nowunderway. The craft's sample return capsule softly touched down January 15within the remote desert landscape of the Utah Test and Training Range.

Oncerecovered, the capsule was opened and the collected samples were transferredover to NASA's Johnson Space Center (JSC) in Houston, Texas.

"Thefirst few Stardust samples have been removed from the comet tray and arecurrently being analyzed by members of the science team," said Carlton Allen,astromaterials curator at JSC. "Most of the aerogel cells remain intact in thetray, and these are being carefully documented in the Stardust lab at Johnson Space Center," Allen told SPACE.com.

Thescience team anticipates announcing initial results at the Lunar and PlanetaryScience Conference, to be held in Houston March 13-17, Allen said.

Meanwhile,some150 eager scientists form an international team now ready for action. They willdive into the dust particles collected by Stardust making use of a variety ofscientific devices.

TheStardust spacecraft used a tennis racquet-shaped collector loaded with aerogelto stop, quite literally, the speeding particles in their tracks. Incomingcomet particles made carrot-shaped tunnels in the aerogel as they stopped. Atthe pointed tip of each tunnel a tiny particle can be found.

Onescientific team that has begun their study of extracted particles from Stardustis at the Lawrence Livermore National Laboratory in Livermore, California.

There,a research team has started dissecting the dust particles using powerful tools.The analysis is a very detailed and precise exercise in which some tracks arecarved out of the aerogel with ultrasonic diamond blades. Scientists then usemicroscopic needles to extract the dust from the tracks.

Stardustreturned less than a milligram of material--a small amount in quantity but sureto result in a big payoff, researchers believe.

Bradleylikened the inspection of the tiny particles as "not unlike a colonoscopy withthe tracks."

Theactual tracks of cometary dust within the aerogel are visible to the naked eye,and the particles themselves can be seen as white specks under a microscope.

"It'sunbelievable. It's almost surreal," Bradley explained. "We've collected so muchstuff. We can see it. With a needle and a spatula...I could put it on the tip ofmy fingernail."

Bradleycalled the Stardust mission "a stunning success", one that far exceeded thescientific community's most optimistic expectations. The particles snaredby Stardust are expected to provide insight into the early formation of oursolar system.