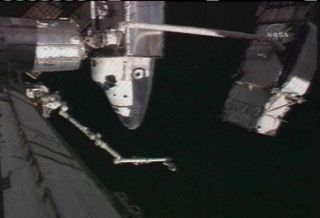 The massive, 17.5-ton Port 6 solar array truss (right) sits perched at the tip of the shuttle Discovery's robotic arm after being handed off from the International Space Station's own arm on Oct. 29, 2007 during NASA's STS-120 mission.
(Image: © NASA TV.)

HOUSTON - NASA added a day to space shuttleDiscovery's STS-120 construction flight, mission managers said today. Thedecision was made to better scope out a grit-filled joint on the InternationalSpace Station's (ISS) backbone-like truss, but the extension could delay anupcoming shuttle launch in early December.

The changes werespeculative earlier today, but STS-120 capsule communicator Tony Antonelli toldthe crew before they went to bed that mission planners had officially approvedthem. Mike Suffredini, NASA's ISS program manager, said that the launch ofshuttle Atlantis could shift from Dec. 6 to Dec. 7 because of the changes.

"We are absolutelybooked," Suffredini said of the schedule leading up to Atlantis' launch."But if all goes well, we'll get that day back."

The upcoming STS-122mission set to launch with Atlantis will ferry the European Space Agency's Columbus laboratory module into orbit and attach it to the newHarmony module.

NASA made the move almosttwo days after spacewalker Dan Tani discovered metallic shavings in a starboardrotating joint, which orients the space station's solar arrays toward the Sun.Early Sunday morning, Tani pried off a thermal covers on the solar alpha rotaryjoint, or SARJ, and took a peek inside.

"I've never seen (aSARJ) in a pristine state, but it was obvious that there wassignificant debris, sort of a dust in there," Tani said during aconference with the STS-120 and space station crews as they floated inzero-gravity. Tani sampled the grit with a piece of tape that engineers willexamine when Discovery returns to Earth in early November.

"It's not aluminizedMylar and it's not from the covers," Suffredini said of the shavings,which space station commander Peggy Whitson found to be iron-containing earliertoday. "So that would tell you that, perhaps, it's some of the steel fromthe bearings or the race (wheel) or some other area."

If such components arecreating the metallic grime, mission managers think the 10-foot (3-meter)diameter rotating joint might be damaged. Until they know for certain, groundcontrollers have halted the still fully operational starboard device.

The disabled componentnow limits the space station's power-gathering abilities, but Suffredini saidthere should be no issues in having enough power to attach the Columbus module in December.

The fourth EVA, orextravehicular activity, that was slated for Nov. 1 had spacewalkers testing a "goo-gun"repair method for the space shuttle's thermally shielded belly?NASA,however, scrapped the short spacewalk and replaced it with 6-plus-hour ventureto better inspect the rotating joint.

"It's a bit ofexploratory surgery," Suffredini said of 22 thermal blankets thatspacewalkers will need to remove from worrisomestarboard joint.

Mission managers said that spacewalkingastronauts need the extra day to rest between the fourth and fifth exhaustingEVAs of the space shuttle mission. As for the thermal repair experiments, ISSflight director Rick LaBrode said equipment would be left on board the spacestation for the STS-122 to test.

"The priority isstill the lowest on our mission," LaBrode said of the new repair test,called the tile repair ablator dispenser (T-RAD).

While mission managersdebated whether or not to change the fourth spacewalk and tack on an extra day,spacewalkers ScottParazynski and Doug Wheelock began preparing for the third EVA of themission, which begins at 5:28 a.m. EDT (0928 GMT) on Tuesday.

Earlier today, groundcontrollers and astronauts on board the space station transferred the35,000-pound (15,875-kilogram) Port 6 (P6) truss segment from space shuttleDiscovery's robotic arm to the ISS robotic arm, setting the stage for thespacewalk. With help from crew inside of the space station, Parazynski andWheelock will latch on the massive Port 6 (P6) solar array truss to itspermanent home on the Port 5 (P5) truss.

Parazynski, however, willspend about 40 minutes after its reattachment to scope out the supposedlypristine rotary joint on the Port 1 (P1) truss.

"Whatever we see onP1 should be considered normal, whatever normal means," Suffredini."We're trying to find out what a normal joint should look like. This jointhas worked fine."

Pamela Melroy, theSTS-120 commander affectionately known as "Pambo" by her crew, saidthe extra day in space is not a surprise and welcomes the change.

"Fortunately, we'vealready talked about this possibility before we flew," Melroy said, notingthe complexity of the mission at hand. "It's another day in space dockedto the space station, and that's great."