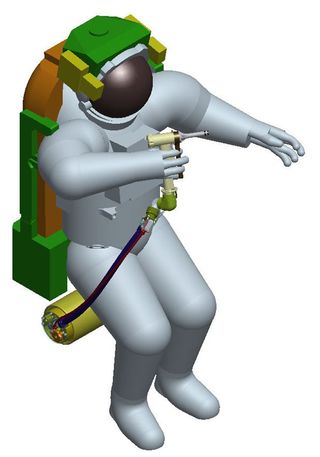 Discovery missionspecialists Scott Parazynski and Douglas Wheelock aim to use a device similarto a caulk gun to repair thermal tile samples that have been deliberatelydamaged.

NASA engineers developedthe TileRepair Ablator Dispenser, or T-RAD, as part of a post-Columbia effort togive astronauts a way to repair damage to the thousands of thermal tiles thatline the underside of the shuttle orbiter.

The device is designed to dispensea putty-like material to fill dents and gouges in the fragile tiles. Alsoknown as the "goo gun," it has never been tested in space.

The development ofheat-shield repair tools and techniques was recommended by the ColumbiaAccident Investigation Board.

NASA planned to test thedevice on a mission next year. Plans to move up the spacewalk demo were laidafter a chunk of foam the size of a baseball duga deep gouge in tiles on Endeavour last month.

NASA managers consideredusing the T-RAD device to repair the tiles, but ground tests and engineeringanalyses showed the shuttle would come through atmospheric re-entry withoutsignificant damage. The analyses proved correct.

A special stowage bin forthe goo gun and tile samples was installed in the cargo bay of Discoveryearlier this week. The shuttle's payload bay doors, which already had beenclosed for flight, were reopened so the Tool Stowage Assembly could be attachedto the starboard sidewall of the orbiter.

Kyle Herring, a spokesmanfor NASA's Johnson Space Center, said the extra spacewalk is expected to beofficially added to the mission during a joint meeting next Monday betweenmanagers of the shuttle and International Space Station programs.

It will lengthen theupcoming mission to 13 days rather than 12 and will equal the greatest numberof spacewalks ever carried out on a shuttle flight. The only other missions tofeature five spacewalks have been Hubble Space Telescope servicing flights.

One of the spacewalks to bedone on Discovery's stay at the station will be carried out by outpostcommander Peggy Whitson and flight engineer Yuri Malenchenko rather than theshuttle crew.

Discovery is scheduled tolaunch Oct. 23 with the U.S. Harmonymodule, which will serve as the gateway to still-to-be-launched Europeanand Japanese science laboratories.

The orbiter is slated toroll over to the Kennedy Space Center Vehicle Assembly Building from Bay No. 3of the Orbiter Processing Facility on Sept. 19.

The fully assembled shuttleis scheduled to roll out to launch pad 39A on Sept. 27.