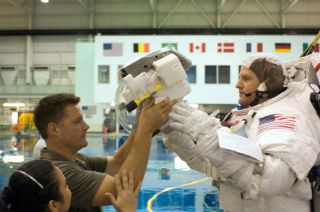 CAPECANAVERAL, Fla. - An Olympic athlete-turned-astronaut and a rookie spaceflyerare leading a spacewalking team set to launch toward the International SpaceStation (ISS) aboard NASA?s shuttle Discovery this week.

Veteranshuttle astronaut Scott Parazynski and first-time flyer Douglas Wheelock aretaking the first shift for the five spacewalks on tap for NASA?s STS-120shuttle flight slated for a plannedTuesday launch. Together with their five crewmates, the spacewalkers will helpa vital connecting node to the station to serve as the anchor for newinternational laboratories and larger ISS crews.

With fourspaceflights under his belt, Parazynski is the most experienced spaceflyer ofDiscovery?s STS-120 crew and hopes to help his rookie crewmates develop theskills to lead on future missions.

?I am notthe oldest, but I am the most grizzled,? Parazynski, 46, told reporters. ?Itake the responsibility of developing them as one of my highest priorities.?

Parazynksiis the chiefspacewalker for Discovery?s STS-120 flight. Hailing from Palo Alto, Calif., and Evergreen, Colo., he studied medicine at Stanford Medical School, where hecompeted on the U.S. Development Luge Team and later served as a Olympic teamcoach for the Philippines during the 1988 Winter Games in Calgary, Canada.

Parazynski conductedextensive studies in the human body?s adaptation to long-duration spaceflightand joined NASA?s astronaut corps in 1992 after completing his residency inemergency medicine in Denver, Colorado. But the seed for his astronaut careerwas planted much earlier.

?I had awonderful upbringing, great parents, and as luck would have it, a father whoworked in the space program,? Parazynski said, adding that his father workedfor Boeing to support NASA?s Apollo moon program. ?So I grew up with theposters on the wall, the model rockets ?I had the dream early on and, I justnever lost track of that aspiration.?

Accordingto Parazynski?s calculations, he is also the first NASA astronaut to be bornafter Mercury astronaut Alan Shepard?s May 5, 1961 launch to become the firstAmerican in space. Parazynksi, who is married to wife Gail and has twochildren, was born on July 28 of that year.

Parazynskifirst launched into space aboard the shuttle Atlantis in 1994 during an 11-dayEarth science mission, then flew to Russia?s Mir Space Station aboard the sameorbiter in 1997 on cargo and crew exchange flight. He flew alongside formerNASA astronaut John Glenn during 1998?s STS-95 shuttle flight aboard Discoverybefore launching to the ISS aboard its sister ship Endeavour in 2000 to helpinstall the space station?s robotic arm.

During theSTS-120 flight, Parazynski said he is looking forward to his fourth spacewalk,which is slated to testa shuttle repair technique that uses a pink goo-like material tofill in damaged heat shield tiles. The test was a late addition to the upcomingmission following tile damage to the shuttle Endeavour during its Augustspaceflight.

"I'mreally excited about it to answer the fundamental question how is this materialgoing to behave [in space],? Parazynski told reporters.

?He is thelife of the party,? Parazynski said of hisspacewalking partner, who goes by the nickname ?Wheels.?

Wheelock,47, is a native of Windsor, New York, and an active U.S. Army colonel with degreesin applied science and engineering, as well as aerospace engineering. While herecalls watching the Apollo moon landings as a nine-year-old boy, Wheelock?spath to the launch pad seems to have evolved from his work as an Army aviatorand test pilot.

?For me, itwas more like a sort of logical progression,? Wheelock said in a NASAinterview. ?Because of my engineering interest, the assembly of, andconstruction of an orbiting laboratory just was sort of the Holy Grail, if youwill, for me as a mission specialist.?

Sincejoining NASA?s spaceflying ranks in 1998, Wheelock has served in a veritablecornucopia of positions ranging from ISS spacecraft communicator in MissionControl to NASA?s Director of Operations at the Gagarin Cosmonaut Training Center in Star City, Russia, where he was trained to serve as a flight engineer forSoyuz spaceflights. He also lived on the ocean floor during NASA?s 10-day NEEMO6 expedition to the Aquarius undersea laboratory.

During histhree STS-120 spacewalks, Wheelock will help install Harmony, reattach thestation?s old Port 6 solar array to its final position on the outpost?sport-most edge and test shuttle heat shield repair methods. The complicatedorbital work should prove among the highlights of Wheelock?s spaceflight debut,but the astronaut said he feels fully trained to tackle his tasks.

?Theenormity of the task is not lost by my excitement for sure,? Wheelock said. ?I?mvery well aware of the complexity of what we?re doing, and I?ve a healthy setof butterflies, you know, just sort of the feeling before the big game.?