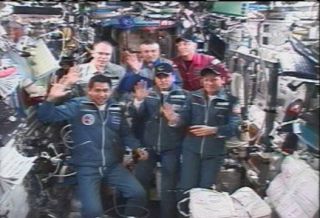 Thefirst female commander of the International Space Station (ISS) arrived at theorbital laboratory Friday alongside a veteran cosmonaut and Malaysia's firstastronaut to complete a two-day chase aboard their Russian spacecraft.

ISSExpedition 16 commander PeggyWhitson, of NASA, made her space station return at about 10:50 a.m. EDT(1450 GMT) as her Soyuz TMA-11 spacecraft docked at the orbital laboratory. Russiancosmonaut Yuri Malenchenko and Malaysian astronautSheikh Muszaphar Shukoraccompanied Whitson to the ISS, where the outpost's current three-man crew gavethem a warm welcome.

"Thebiggest gift is our friends who are here on time," said cosmonaut FyodorYurchikhin, the station's current Expedition 15 commander. "Everybody issmiling and happy, so the fun is only about to begin."

Whitsonand Malenchenko, both veterans of past ISS crews,are beginning a six-month spaceflight and will replace Yurchikhin and Expedition15 flight engineer Oleg Kotov on the space station during a nine-day crew swap.NASA astronaut Clayton Anderson, currently aboard the ISS, will stay on for thefirst stage of the Expedition 16 mission.

Yurchikhinand Kotov are due to land Oct. 21 to complete their own six-month mission tothe space station. Shukor, a trained orthopedicsurgeon who is flying under a commercial agreement between the Malaysiangovernment and Russia, will spend about nine days performing scienceexperiments and observing the Earth before returning home with the Expedition15 crew.

"Ifeel very well and I have lots of Russian and American friends up onboard withme here," said Shukor, who spoke to his father from orbit viaa video link. "I love you very much and when I come back I hope sharemy experiences with you and with all the Malaysian people."

"Withoutyour contributions we wouldn't be able to see one of our men in space," Jarjis said. "We are committed to remaining apermanent member of this [space] community."

Expedition 16 marksthe second flight to the ISS for Whitson and the third for Malenchenko, withRussian and NASA mission managers touting them as their most experienced ISScrew.

Bothastronauts spent about 185 days aboard the ISS, Whitson as an Expedition 5flight engineer in 2002 and Malenchenko as Expedition 7 commander in 2003. Malenchenkoalso visited the ISS during NASA's STS-106 shuttle flight in 2000 and is aveteran commander of Russia's Mir Space Station.

"Yuriand I will both be ready to step in very quickly," Whitson said inpreflight NASA interview. "Which, I think, we’re going to needbecause this mission is, a very aggressive mission."

Each of theNASA shuttle missions -- the first of which is setto launch Oct. 23 -- will bring a new flight engineer to replace the third sloton Whitson's crew as well as a major addition to the ISS structure.

The shuttleDiscovery is slated to deliver the Harmony connecting node to the ISS laterthis month, with the European Space Agency's Columbus laboratory due at the stationin December. A Canadian-built addition to the station's robotic arm and thefirst segment of Japan's three-part Kibo laboratory are currently scheduled tolaunch in February.

"[W]ehave a very exciting mission planned," Whitson said. "I'm lookingforward to all the new elements that we're going to be able to ad to theInternational Space Station."