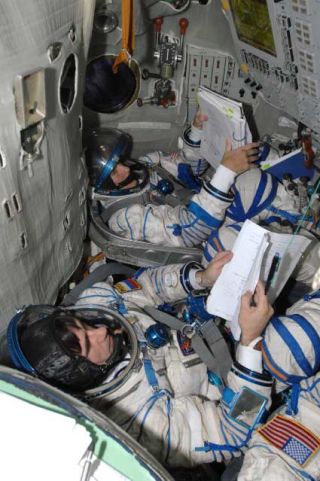 Two veteranastronauts and Malaysia?s first spaceflyer are poised for a Wednesday launchtoward the International Space Station (ISS) to begin the busy mission of upgradingthe orbital laboratory.

"It'sgoing to be very aggressive with all the activities going on," Whitsonsaid of the upcoming mission. "And it is going to be challenging."

Whitson andMalenchenko will replace the space station's current Expedition 15 commanderFyodor Yurchikhin and flight engineer Oleg Kotov during a 12-day crew swap.Shukor will return on Oct. 21 with the Expedition 15 crew, but NASA astronautClayton Anderson ? currently serving as an ISS flight engineer ? will stay aboardto join the first stage of Expedition 16.

TheRussian-built Soyuz TMA-11 spacecraft ferrying Shukor and the Expedition 16crew to the ISS will launch from the Central Asian spaceport of BaikonurCosmodrome in Kazakhstan, the same site that launched the world'sfirst artificial satellite - Sputnik - 50 years ago last week.

"Ibelieve we have achieved a considerable progress over such a short timeperiod," Malenchenko said of Sputnik's anniversary. "Currently wehave a continuous presence of humans in space, not only living in space butperforming complicated activities and tasks, performing science experiments,and it has been going on for years."

Hailingfrom her family's farm in Beaconsfield, Iowa, Whitson is no stranger tolong-duration spaceflight.

As a flightengineer and NASA's firstofficial ISS science officer, she spent 185 days in orbit during theExpedition 5 station flight. But Expedition 16 will mark her first in a newrole as the space station's first female commander.

"Iguess it is a milestone and I guess I'm just the person that happened to be inthe right place at the right time," Whitson told reporters. "I certainlydon't want to be the last female commander of the space station, and I don'tanticipate that to be the case."

Whitson,47, is an accomplished biochemist with a Ph.D. from Rice University and firstjoined NASA as a research biochemist in 1989. By 1992, she served as theproject scientist for the joint Shuttle-Mir program between NASA and Russia'sFederal Space Agency. But it wasn't until 1996 that Whitson finally joinedNASA's astronaut corps and achieved a childhood dream.

"Itreally didn?t become a reality to me to become a goal until I graduated fromhigh school, which was coincidentally the same year they picked the first setof female astronauts," Whitson said in a NASA interview. "I thinkthat was when I decided I wanted to become an astronaut."

Whitsonsaid that, as a scientist, she is eager to see the deliver of the station's newHarmony connecting node later this month, which will serve as an anchor for theEuropean-built Columbus laboratory to arrive in December, Japan's Kibo sciencemodules to launch next year and others.

"Ithink it's a very important stepping stone," Whitson said, adding that thenew modules and equipment will boost the station's ability to perform science.

LikeWhitson, Malenchenko, too, is a veteran long-duration cosmonaut. But becoming atest cosmonaut and reaching space was not goal the 45-year-old initiallybelieved to be attainable.

"WhenI was growing up almost every boy wanted to be a cosmonaut; every spaceflightwas so unusual and so exciting," Malenchenko said in a NASA interview,adding that life as a military pilot appeared more realistic. "I wasoffered an opportunity to go into the space program and I agreed, and I neverregretted it later."

In 2000,Malenchenko helped prime the ISS for human habitation during NASA's STS-106shuttle flight, then took charge of the orbital laboratory in 2003 as commanderof the 185-day Expedition 7 mission. During Expedition 16, he will serve asSoyuz spacecraft commander.

"Youknow, I would like to say that I spent a fair amount of time aboard the spacestation last time," Malenchenko told reporters. "So in a way, itfeels like you are coming home."

Malenchenkosaid he welcomes the frenetic pace of orbital construction ahead for hisExpedition 16 mission. During his Expedition 7, he commanded the station'sfirst two-person crew after the 2003 Columbia shuttle accident.

"Thesituation overall was quite different," Malenchenko said. "Now whatwe are seeing is very active development and assembly of the station."

It isprecisely those new assembly tasks that Malenchenko expects to enjoy, though hedoes hope to look at his home planet from time to time.

"It'salways beautiful to look at the Earth and to photograph it," he said.

Anorthopedic surgeon by training, Shukor will make Malaysian history as the nation'sfirst astronaut, or "angkasawan," during his 12-day orbital trek.

During hisspaceflight, Shukor plans to perform a series of research and physiologicalexperiments for Malaysia and the European Space Agency. He is also totingcultural items and foods to the ISS that he hopes will spur interest in spaceand science among Malaysia's youth.

Shukor, whois Muslim, will also be in orbit during the final days of the holy month ofRamadan, though Malaysian officials have said he won't have to fast while inspace.

?I promiseto make Malaysia proud,? Shukor wrote Tuesday on a Malaysian Web site where heis chronicling his flight. ?That?s a promise I intend to keep!?