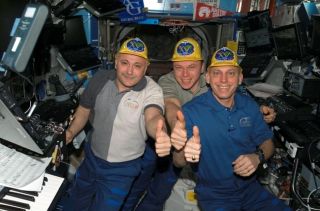 Astronautsaboard the International Space Station (ISS) are preparing their orbitallaboratory for a crew swap that will begin with the arrival of three new spaceflyersnext month.

"It'shard to believe that it has already been 170 days in its execution," NASA'slead Expedition 15 flight director Bob Dempsey said of the mission during abriefing at the Johnson Space Center in Houston, Texas.

Yurchikhinand Kotov will hand control of the space station over to Expedition 16commander Peggy Whitson and flight engineer Yuri Malenchenko, who are slated tolaunchtoward the ISS with Sheikh Muszaphar Shukor --Malaysia's first astronaut -- on Oct. 10 from Baikonur Cosmodrome inKazakhstan.

The Expedition15 astronauts are completing a six-month mission that began in mid-April. Sincethen, they have staged three spacewalks and hosted two visiting NASA space shuttlecrews to continue assembly of the half-built ISS. Yurchikhin and Kotov are dueto return to Earth with Shukor on Oct. 21 while Anderson takes up his post asan Expedition 16 flight engineer.

Yurchihkhinand his Expedition 15 crewmates are also expected to clear a docking port forthe incoming Expedition 16 astronauts on Thursday, when they will move their SoyuzTMA-10 spacecraft to a berth on the aft end of the space station's Zvezdaservice module.

Whitson,the spacestation's first female commander, is NASA's first astronaut to serve asecond tour aboard the ISS. She last flew to the station in 2002 as an Expedition5 flight engineer and NASA's first ISS science officer.

"Herprevious experience is going to be very valuable to us as we take on this verychallenging increment," said Holly Ridings, NASA's lead Expedition 16flight director, in mission briefing. Malenchenko, who commanded the ISS in2003 during Expedition 7, also brings vital experience to the upcoming flight,she added.

Ridingssaid Whitson and her Expedition 16 crewmates will have no shortages ofchallenges during their six-month mission.

On Oct. 23,just two days after the Shukor and the Expedition 15 crew depart the ISS, NASAplans to launch the space shuttle Discovery's STS-120 astronauts on a 14-dayconstruction mission to the ISS. That shuttle mission will deliver a vitalconnecting node to the ISS, relocate an older solar array truss and ferry NASA astronautDaniel Tani to replace Anderson as part of the Expedition 16 crew.

More trickyspace station construction work and up to two more shuttle missions - each ofwhich will ferry a replacement Expedition 16 crewmember to the ISS - areplanned during the long-duration flight. The launch of unmanned Russiancargo ships and Europe's first Automated Transfer Vehicle - a robotic resupplyship dubbed Jules Verne - are also scheduled while Whitson and Malenchenko areaboard the station.

"It'sa challenging sequence, but we're going to get there," Ridings said.