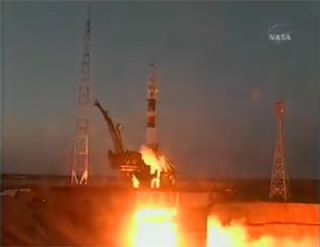 A Russian Soyuzrocket roared into orbit Wednesday carrying Malaysia's first spaceflyer and aveteran astronaut team on a tricky mission to build up the International SpaceStation (ISS).

Spacestation commander Peggy Whitson -- thefirst woman ever to lead an ISS mission -- launchedinto space alongside veteran cosmonaut Yuri Malenchenko and Malaysianastronaut Sheikh Muszaphar Shukor. Their Soyuz TMA-11 spacecraft rocketed intoorbit at 9:22 a.m. EDT (1322 GMT), though it was just after sunset at their BaikonurCosmodrome launch site on the steppes of Kazakhstan.

Whitson,with Malenchenko as flight engineer, plan to host up to three visiting shuttlecrews and a series of rotating crewmembers duringtheir six-month mission.

"I'mreally looking forward to it," Whitson told reporters in a prelaunch pressconference of her busy Expedition 16 mission. "'I'm confident in ourability to accomplish all our tasks because I like a challenge."

A newconnecting module, the European Space Agency's Columbus laboratory, the firstpiece of Japan's three-segment Kibo laboratory and a robotic arm addition are slatedto arrive during Expedition 16. Europe's first unmanned cargo ship, dubbed JulesVerne, is also due at the ISS during the mission.

"Historicallyspeaking, this has got to be one of the pinnacles of the program," NASA ISSprogram manager Mike Suffredini said Tuesday from Baikonur on NASA TV. "Iwas talking to Peggy earlier and she's chomping at the bit."

Whitsonand Malenchenko will replace the station's current Expedition 15 commanderFyodor Yurchikhin and flight engineer Oleg Kotov during a nine-day crew swaponce they dock at the ISS on Friday. NASA astronaut Clayton Anderson, currentlyaboard the space station, will stay on for the first stage of Expedition 16.

"We'rereally looking forward to seeing them in just a few days," Whitson said.

Yurchikhinand Kotov will return to Earth on Oct. 21 after completing a six-monthspaceflight. Shukor land with the Expedition 15 crew after his own 11-day spaceflight,during which he plans to perform a series of experiments and observe the Earth.Shukor said he was honored to be chosen from the initial 11,000 applicants toserve as Malaysia's first astronaut, or "angkasawan."

"I amready to go to space," he said in a prelaunch briefing.

Shukor, a 35-year-oldorthopedic surgeon, is flying to the ISS as part of a deal between Malaysia andRussia to purchase Russian-built military jets. In addition to his experiments,Shukor is bringing traditional Malaysian items and food to the space stationand hopes to practice his Muslim faith while in orbit during the final days ofthe holy month of Ramadan.

"Beinga Muslim and going into space is a big responsibility for me, not only forMalaysian people but also to Muslims all over the world," he said. "I'mnot sure how, but I'm sure I'll find a way to pray and fast in space, and I'll comeback and share it."

Shukor andthe Expedition 16 crew are due to dock at the ISS Friday at 10:52 a.m. EDT(1452 GMT), with Malenchenko serving as Soyuz commander during the two-dayspaceflight.

As thethree spaceflyers launched into orbit, seven other astronauts trained for theirown spaceflight. The seven-astronautcrew of NASA's STS-120 mission rehearsed plans for an Oct. 23 launch aboardDiscovery at the agency's Kennedy Space Center in Cape Canaveral, Florida.

The 14-daymission, led by female shuttle commander and veteran astronaut Pamela Melroy,will deliver the Harmony connecting node to the ISS and lay the foundation forfuture international laboratories. The shuttle flight marks the first time twospacecraft commanded by female astronauts will fly at the same time.

"We'revery excited about that," Melroy told reporters Tuesday. "In fact,the only problem with Peggy's launch is that we're going to be strapping in sowe won't be able to watch it live."

But before Discovery'sastronauts can launch toward the ISS, the Expedition 16 crew must take controlof the orbital laboratory. The Expedition 15 astronauts have spent the last fewweeks preparing for their relief crew's arrival and watched a live videobroadcast of today's successful launch.

Andersongave two thumbs and a wide grin to video cameras aboard the ISS after the liftoff.He will return to Earth later this month during the STS-120 mission, which willbring the first of three new Expedition 16 crewmembers to the space station duringeach of the upcoming shuttle flights.

"I'mhoping I won't be needing this, but just in case," joked Whitson.