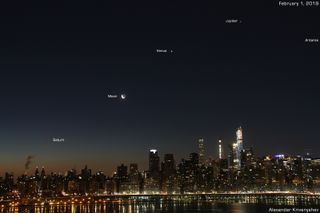 Alexander Krivenyshev of WorldTimeZone.com captured a glorious arcing alignment of Saturn, the crescent moon, Venus, Jupiter and the red star Antares over the Big Apple shortly before sunrise on Friday morning (Feb. 1).

"It was a great show — no time to sleep!" Krivenyshev, who took the photo from Guttenberg, New Jersey, told Space.com via email.

This skywatching spectacle was pretty special, but don't fret if you missed it — the principal players will continue putting on various shows for a while. For example, in the predawn hours of Feb. 18, Venus and Saturn will hang very close together near the horizon, separated by a mere finger's width from our perspective here on Earth.

And a day later, skywatchers will be treated to the largest and brightest full moon of 2019. The Feb. 19 "supermoon" will occur just 7 hours after lunar perigee, the moon's closest approach to Earth. (The moon's orbit around our planet is slightly elliptical, so some full moons appear larger in our sky than others. It's all a matter of timing.)

And a quick word about Antares, one of the brightest stars in the sky: It's a bloated red supergiant about 700 times wider than the sun but less than one-millionth as dense. Antares, which lies about 600 light-years from Earth in the constellation Scorpius (the Scorpion), is nearing the end of its life and will die in a violent, dramatic supernova explosion before too much longer (in the cosmic scheme of things).