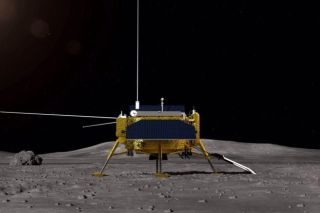 An artist's illustration of China's Chang'e 4 lander on the far side of the moon. The mission launched on Dec. 8, 2018 Beijing Time (Dec. 7 EST/PST) and is expected to touch down in the first few days of January 2019.
(Image: © CASC/China Ministry of Defense)

China's Chang'e 4 mission will soon make a historic touchdown on the far side of the moon.

Chang'e 4, which consists of a stationary lander and a mobile rover, is expected to land sometime in the first few days of January. The mission totes six kinds of scientific payloads.

The lander carries the Landing Camera (LCAM), the Terrain Camera (TCAM), and the Low Frequency Spectrometer (LFS). There are three kinds of payloads on the rover — the Panoramic Camera (PCAM), the Lunar Penetrating Radar (LPR), and the Visible and Near-Infrared Imaging Spectrometer (VNIS). [China's Chang'e 4 Moon Far Side Mission in Pictures]

The LFS is newly developed for Chang'e 4, which launched on Dec. 7; the other payloads are inherited instruments from the Chang'e 3 mission, which landed on the moon's near side in December 2013.

Overall, the scientific objectives for Chang'e 4 are:

"We've been following the Chang'e 4 mission closely," said Jack Burns, Professor of Astrophysics and Planetary Science at the University of Colorado, Boulder. He is also the Director of the NASA-funded Network for Exploration and Space Science (NESS).

Several Dutch members of the NESS team, Burns noted, are co-principal investigators of the NCLE aboard Queqiao, which is positioned at an L2 halo orbit.

"Their antenna won't be deployed until after the main mission involving the farside lander is complete. They expect to begin gathering data in the spring. The expectations for this experiment are modest," Burns pointed out. There are two issues, he said.

"First, no effort was made to make the satellite radio-quiet. In fact, the team doesn't even know what the amount of internally generated radio frequency interference (RFI) will be. It could be overwhelming or more modest. Second, the satellite is not in an ideal orbit for radio astronomy."

The L2 halo orbit is in constant view of the Earth and therefore is exposed to Earth RFI, which is quite substantial, Burns explained. "This too may limit the quality of the data. Nonetheless, this is an exciting experiment as it is the first to characterize the lunar radio environment since NASA's Radio Astronomy Explorer-2 (RAE) in 1972." [China's Moon Missions Explained (Infographic)]

Provided by Germany, the LND instrument was developed by Kiel University. The device is designed to gauge radiation on the moon, mainly for future human missions. It will also measure the water content underneath the lander.

The tin also contains water, a nutrient solution and air. A tiny camera and data transmission system allows researchers to keep an eye on the seeds and see if they blossom on the moon.

"We have to keep the temperature in the 'mini biosphere' within a range from 1 degree to 30 degrees, and properly control the humidity and nutrition. We will use a tube to direct the natural light on the surface of moon into the tin to make the plants grow," Xie Gengxin, chief designer of the experiment, told China's state-run Xinhua news agency earlier this year.

Added Liu Hanlong, chief director of the experiment and vice president of Chongqing University: "Our experiment might help accumulate knowledge for building a lunar base and long-term residence on the moon."

The mini biosphere experiment was selected from more than 200 submissions, according to the China National Space Administration (CNSA).

Another aspect of the Chang'e 4 rover is the LPR, which will be able to detect the lunar subsurface structure on the robot's patrol route, and to detect the thickness and structure of the lunar regolith. The device is a nanosecond impulse radar with bistatic antennas.

A similar device was utilized on the Chang'e 3 rover, known as Yutu.

It works like this: An ultra-wideband nanosecond impulse is produced by a transmitter, sent through the transmitting antenna down to the lunar surface. The receiving antenna receives the reflected signal. The echo signal from the underground target is received by the receiving antenna, amplified in the receiver and then restored as data record.

China's next lunar probe, Chang'e 5, is designed to bring select samples from the moon back to Earth. It will build upon a progression of Chinese moon explorers: the Chang'e 1 and Chang'e 2 orbiters in 2007 and 2010, respectively, and the Chang'e 3 lunar lander/rover mission, which touched down in December 2013.

Zhang Kejian, deputy minister of the Ministry of Industry and Information Technology of China, has stressed China's willingness to cooperate with other countries within the space program.

Zhang, who is also the head of the CNSA, noted that Chang'e 6, China's second sample return lunar mission, will provide 22 lbs. (10 kg) of payload space on the orbiter and lander for international partners.

Leonard David is author of the forthcoming book, "Moon Rush: The New Space Race" to be published by National Geographic in May 2019. A longtime writer for Space.com, David has been reporting on the space industry for more than five decades. Follow us @Spacedotcom or Facebook. This version of the story published on Space.com.