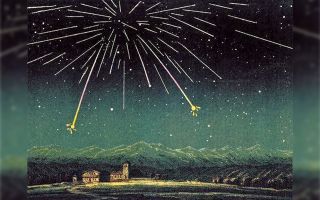 The November 1872 incidence of the Andromedid meteor shower, as seen over France.
(Image: © Alto Vintage Images/Alamy)

"In almost all of the older star books, you will find a shower known as the Andromedids listed as among the best and to be looked for. That used to be true. In recent years, however . . . the gravitational pull of one of the planets has displaced their orbit so that they no longer lie in the path of the earth. At any rate, it looks as if the once famous Andromedids will have to be crossed off our meteor-hunting date book."

Once upon a time, there was a small comet. The first person to sight it was the Frenchman Jacques Lebaix Montaigne, in 1772. Then, in 1805, it was observed by another French observer, Jean Louis Pons. In 1826, the comet was found yet a third time, this time by the German skywatcher Wilhelm von Biela, who not only tracked it, but went on to compute an orbit for it and discovered that it was circling the sun approximately every 6.5 years. It was only the third comet to have its orbit successfully calculated — and, as such, it was christened Comet Biela. [Photos: Spectacular Comet Views from Earth and Space]

The comet was successfully recovered by the British astronomer John Herschel in 1832. It was missed in 1839, but in January 1846, an observation from Washington, D.C., by the American astronomer Matthew Fontaine Maury indicated that Biela's Comet had unexpectedly split into two distinct pieces. Maury's observation was soon confirmed by other observers worldwide. In 1852, the two comets returned, but they failed appear in 1859 and 1865-66. The consensus was that both comets had disintegrated.

But in 1872, and again in 1885, as the Earth crossed the orbit of the now-vanished comet, stupendous storms of thousands of meteors were seen in its place. There continued to be noteworthy meteor displays, albeit of progressively diminishing intensities, in 1892, 1899 and 1904 — but after that, there was hardly anything at all.

As A.C.B. Lovell wrote in his comprehensive book, "Meteor Astronomy" (Oxford at the Clarendon Press, 1952), "The shower associated with Biela's Comet has almost completely disappeared. This disappearance, together with the comet's strange disruption, gives to the Andromedid shower a unique position in meteor astronomy."

But then, in 2011, something totally unexpected happened: The Andromedids came back to life!

During much of the 20th century, Andromedid activity ranged from sparse to almost nonexistent. For many years observers who bothered to look for them saw no more than maybe one or two meteors per hour. In other years, a flurry of perhaps four or five was reported, but such occurrences were very few and very far between. Astronomers pointed to the fact that the source of the dusty material that produced the Andromedids, Biela's Comet, no longer existed. And whatever dross it left behind had become widely dispersed and probably adversely influenced by close encounters with Jupiter, whose gravitational field could have shifted most of the residual bits of cometary debris from interacting with Earth.

And yet, during the predawn hours of Dec. 5, 2011, a half dozen Canadian radar stations, which send out pulses of radio waves that bounce off meteor trails, detected an average of 50 meteors an hour. The unusually strong meteor outburst appeared to radiate from a region of the sky near the famous "W" of Cassiopeia, which borders the constellation Andromeda.

A little over a year later, in "The Astronomical Journal," astronomer Paul A. Wiegert and three colleagues at the University of Western Ontario, announced in a technical paper that the unexpected meteor outburst was, in fact, a recurrence of the Andromedid meteor shower.

Their unforeseen 2011 revival was the shower's best performance in more than a century.

Using computer technology, the Canadian astronomers modeled the 2011 shower and traced the meteors' origin to particles that Biela's Comet had shed in 1649, more than a century before the comet was even known to exist. And from their study, Wiegert and his colleagues said they think that there is a "chance" that a return engagement of Andromedid meteors could happen this week, specifically during the overnight hours of Wednesday evening (Dec. 5) into the morning hours of Thursday (Dec. 6).

The authors said that the 2018 Andromedid impact wouldn't be quite as strong as in 2011 — perhaps only about 70 percent of that year's intensity. Still, that implies rates of up to perhaps 35 per hour, according to Wiegert's computer simulations.

His simulations also suggest that an even stronger outburst is in the offing in 2023. Notes Canadian meteor specialist Peter Brown, "2023 looks pretty solid. We have some reasons to suspect that may be the stronger of the bunch. It's not a storm, but it's a very strong outburst."

But first, let's concentrate on what "might" come our way this week. [Gallery: Amazing Skywatcher Photos from Around the World]

For most meteor showers, the radiant, or emanation point, of the meteors usually does not come into good viewing position until after midnight or during those ungodly predawn hours. But that's not the case for the Andromedids. Cassiopeia's distinctive W (or M) shape stands almost directly overhead around 8 p.m. local time. No losing sleep over that!

By midnight, the radiant is halfway up in the northwest sky, and by dawn it's hanging low above the north-northwest horizon.

Meteors shine sooner when they strike the atmosphere traveling quickly, but they also shine sooner when they're made of softer material. But in the case of the Andromedids, its meteoroids are among the densest, probably coming directly from the pulverized nucleus of Biela's Comet. And they are slowpokes, among the most sluggish meteors with speeds as slow as 10 miles per second (16 kilometers per second). As such, they are mostly faint (because of the slowness) but occasionally you might catch one brighter than first magnitude. Regardless, try to get to as dark a site as possible or else you'll miss seeing most of them. Their primary color is red, and sometimes they'll leave trains of orange sparks.

It will be interesting to see what happens — were the Andromedids just a one-hit wonder in 2011? Or will they stage another comeback this week?

If the latter turns out to be the case, then, contrary to what Henry Neely wrote over 70 years ago, perhaps we can write the Andromedids back into our meteor-hunting date book.