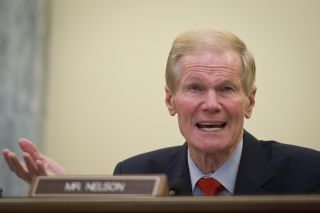 Sen. Bill Nelson, D-Fla., has generally been a strong advocate of NASA in committee hearings, like this one in 2012.
(Image: © NASA/Bill Ingalls)

Nelson served as a payload specialist in 1986 aboard the space shuttle Columbia, spending six days in orbit. He went to space as a sitting member of the U.S. House of Representatives, a position he held from 1979 to 1991. He ran for senator in 2000 and won, beginning a three-term career in the upper house. He is the ranking member on the Senate Committee on Commerce, Science and Transportation, where he has generally been a strong advocate for NASA.

According to reporting by the Tampa Bay Times, the ballot tally in Nelson's senatorial election is close enough that Florida's secretary of state could call for a recount, although such a procedure is not mandatory. Scott has claimed victory, although Nelson has not conceded and the Associated Press has not officially called the race. [Presidential Visions for Space Exploration: From Ike to Trump]

Other races held yesterday also have connections to space. Ted Cruz, the Republican senator from Texas who chaired the Senate Committee on Commerce, Science and Transportation, defeated Democratic challenger Beto O'Rourke in a closely watched vote.

John Culberson, a Republican congressman representing Texas' seventh district, lost his re-election campaign to Democrat Lizzie Fletcher. The district includes NASA's Johnson Space Center, and Culberson has been a vocal advocate of the Europa Clipper mission to Jupiter's icy moon, which is considered a strong candidate in the search for extraterrestrial life. Fletcher targeted that advocacy during her campaign.

Another Republican with space ties, Dana Rohrabacher in California's 48th district, also likely lost his re-election campaign, although the race has not been formally called. Rohrabacher was an early proponent of commercial space exploration.

More changes will occur in House committees, because Democrats took over the majority in that body. The House Science Committee chair, Republican Lamar Smith of Texas, resigned rather than run for re-election, but he was infamous for denying the scientific evidence for climate change. The chair will now be held by a Democrat, likely Eddie Bernice Johnson, who trained as a registered nurse before joining Congress.

Alexandria Ocasio-Cortez, who easily won the general election in New York's 14th congressional district, had an asteroid named in her honor after winning a high school science fair. The asteroid, 23238 Ocasio-Cortez, was named in 2007.