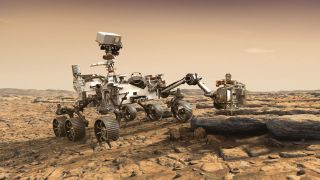 An artist's depiction of the Mars 2020 rover at work on the Red Planet.
(Image: © NASA/JPL-Caltech)

NASA's next Mars spacecraft will soon know its landing site, as scientists meet to debate the relative merits of four final contenders. The mission will investigate whether the Red Planet ever hosted life.

That meeting, taking place in California, gathers hundreds of people to make a final community recommendation to NASA for the Mars 2020 rover mission landing site.

"The Mars 2020 landing site could set the stage for Mars exploration for the next decade," Thomas Zurbuchen, associate administrator of the Science Mission Directorate at NASA, said in a statement. "I'm looking forward to the spirited debate and critical input from the science and engineering community. Whichever landing site is ultimately chosen, it may hold the very first batch of Mars soil that humans touch."[NASA's Mars Rover 2020 Mission in Pictures]

That's because Mars 2020 is designed to be the first part of a hoped-for sample-return mission, although the homeward leg is not yet on the agency's formal docket. But among Mars 2020's other tasks will be gathering and packaging up dirt samples that a future mission can bring home, so scientists could study Martian soil in terrestrial laboratories for the first time.

But the Mars 2020 rover can travel only so far, so scientists need to pick a landing site that optimizes the mission. Not only should the site avoid adding danger to the already-hazardous process of landing on Mars, but it should also allow access to a range of scientifically intriguing sites.

Scientists have already narrowed the site down to just four options: Columbia Hills, Jezero Crater, Northeast Syrtis and Midway. At this week's three-day workshop, scientific advocates of each candidate location will explain the appeal of the site. At the event's end, the group will send a final recommendation to NASA.

The agency plans to announce a final decision before the end of the year, according to the statement. That's plenty of time for the Mars 2020 team to finalize plans for the mission, which is scheduled to land on our neighboring planet in February of 2021.