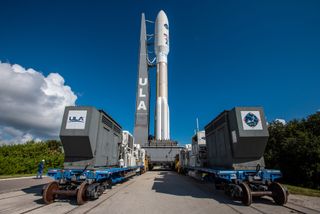 An Atlas V rocket will light up the midnight sky over Florida early Wednesday (Oct. 17) to launch a new high-tech military satellite into orbit, and you can watch the liftoff live online.

Built by Lockheed Martin, AEHF-4 is the fourth in a series of high-powered military communications designed to "provide survivable, global, secure, and jam-resistant communications for high-priority military ground, sea, and air assets," according to a U.S. Air Force description. The satellite reportedly cost about $1.8 billion, according to SpaceNews.

"This fourth satellite will complete a worldwide ring of AEHF satellites to deliver global extended data rate (XDR) coverage for the U.S. Air Force and for the partner nations – Canada, the Netherlands and the United Kingdom – that also connect to the AEHF network," Mike Cacheiro, Lockheed Martin vice president of protected communications, said in a statement.

"It's an important asset for the warfighter and will be employed for years to come," Lt. Gen. John Thompson of the USAF Space and Missiles Systems Center in Los Angeles said of AEHF-4 in a statement when the satellite was delivered to its launch site in July.

Editor's note: Visit Space.com tonight for live video of the AEHF-4 satellite launch. If you capture an amazing photo or video of the launch that you'd like to share with Space.com and our news partners for a possible story or image gallery, send images and comments to spacephotos@space.com.