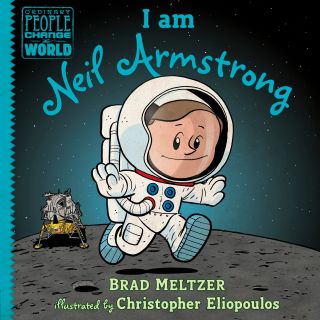 In "I Am Neil Armstrong," a new children's book detailing Armstrong's life, author Brad Meltzer shows readers how an eager young tree climber got all the way to the moon.

It would be hard to find someone who doesn't know the name Neil Armstrong. He was the first person to ever set foot on the moon — a "reluctant American hero" who captured the world's attention alongside fellow astronauts Buzz Aldrin and Michael Collins in NASA's Apollo 11 mission. But Armstrong's life story, his journey from curious child to beloved astronaut, isn't as well-known.

This book, released Sept. 11, is part of an extensive series of biography books by Meltzer, who is a No. 1 New York Times best-selling author and host on the History channel. This book gives kids a comprehensive, fun look at the lives of everyone from Armstrong to Harriet Tubman, Jane Goodall and Martin Luther King Jr. [Photos: Neil Armstrong, American Icon Remembered]

In his book about Armstrong, Meltzer starts at the beginning. He opens with Armstrong as a young child in Ohio, climbing a silver maple tree, eager to get to the top. Grabbing a dead branch, the young Armstrong falls to the ground. But, as the book says, while Armstrong was devastated by the fall, "he does the most important thing of all. He gets back up,." Meltzer told Space.com.

"You realize that the greatest legacy is not the giant leap for all mankind, but it's the only reason he gets to take that giant leap are the thousands of smaller steps he took to get there," Meltzer told Space.com

Meltzer wants young readers to walk away from this book knowing a little bit more about Armstrong's story, and he also hopes that they will be inspired by his hard work and the many difficult steps he actually took to get to the moon.

"I Am Neil Armstrong" shows kids what it means to be an engineer, what it means to fall and get back up again and so much more. "This book isn't about just going to the moon," Meltzer told to Space.com.

"I Am Neil Armstrong" by Brad Meltzer is available for purchase on Amazon.com.