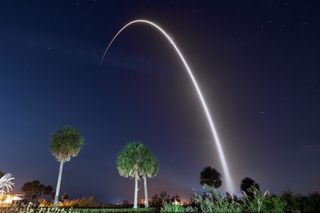 SpaceX launched a Telstar communications satellite into orbit in July 2018 and will launch a second one Sunday (Sept. 9).
(Image: © SpaceX/Flickr)

SpaceX is prepared to loft a hefty communications satellite into orbit tonight (Sept. 9) and then attempt to land a rocket's first stage on a drone ship at sea.

A SpaceX Falcon 9 rocket will launch the Telstar 18 Vantage communications satellite, also known as Apstar 5C, from Cape Canaveral, Florida, during a launch window that starts at 11:28 p.m. EDT (0328 GMT on Sept. 10). You can watch it online here at Space.com, courtesy of SpaceX. In case of delays, the launch window stretches for 4 hours.

The satellite, which will operate as a partnership between the Canadian company Telesat and the Hong Kong-based company APT Satellite Co. Ltd., will provide broadcast, enterprise and government communications services over the Pacific Ocean, stretching from Hawaii across to India and Pakistan, according to a statement from Telesat. The satellite weighs in at a hefty 15,564 lbs. (7,060 kilograms), according to Spaceflight Now.

SpaceX will use one of its newest Falcon 9 rockets, the Block 5, for the launch — though, unlike for its previous Telstar launch in July, the company is lofting a new, rather than previously flown, rocket first stage. After the launch, SpaceX plans to attempt to land the stage on the company's East Coast drone ship, Of Course I Still Love You.

SpaceX successfully test-fired the rocket's engines on Sept. 5 at the launchpad, Launch Complex 40, but then the launch was delayed by 24 hours to complete preflight checkouts, SpaceX officials wrote in a tweet Thursday (Sept. 6). As of Friday (Sept. 7), the Air Force's 45th Weather Squadron gave a 60 percent chance of favorable weather; the main risks are the possibility of thick cloud layers and cumulous clouds whose tops reach freezing temperatures.

After the launch, the satellite will maneuver into a high geostationary orbit, staying still over the Pacific Ocean as the satellite orbits and Earth rotates. APT Satellite will use 57.5 percent of the satellite's communications, with Telesat taking the rest. The satellite is rated to operate for 15 years, according to Telesat.