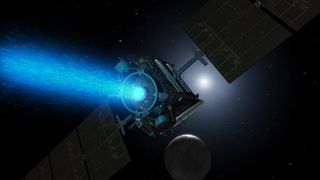 NASA's Dawn spacecraft, seen here in an artist's illustration, will reach the end of its mission to the asteroid belt in 2018.
(Image: © NASA)

NASA will hold a live "science chat" today (Sept. 7) to showcase the success of the Dawn spacecraft in the asteroid belt as the mission nears its end, and you can watch it live online.

The Dawn spacecraft, which visited the huge asteroids Vesta and Ceres in the asteroid belt between the orbits of Mars and Jupiter, is "approaching the end of its 11-year mission," NASA officials said in a statement. In today's webcast, which you can watch live here at 2 p.m. EDT (1800 GMT), NASA scientists are expected to review Dawn's greatest triumphs at Vesta and Ceres. [Dawn's Pictures: The Weird Bright Spots of Ceres]

The spacecraft is currently orbiting Ceres, the largest asteroid in the solar system that is also classified as a dwarf planet. Dawn is expected to end its mission in orbit there when it runs out of hydrazine fuel later this year.

NASA's $466 million Dawn spacecraft launched in 2007 to explore the asteroid belt like never before. Using an ion propulsion system, the spacecraft first flew to the asteroid Vesta and studied the space rock from orbit in 2011 and 2012. Dawn then flew to Ceres, arriving in orbit around the dwarf planet in March 2015.

In addition to its many discoveries about both asteroids — including strange, bright spots on Ceres that have been tantalizing photo targets — Dawn proved its ability to visit multiple objects in the solar system with its ion propulsion system.

"The mission aided scientists in characterizing the early solar system and the processes that dominated its formation," NASA officials said in the statement. "Dawn is the only spacecraft to orbit two deep-space destinations, a feat enabled by the efficiency of the spacecraft's ion propulsion system."