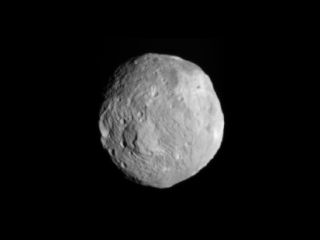 NASA's Dawn spacecraft snapped this photo of the huge asteroid Vesta on July 9, 2011. It was taken from a distance of about 26,000 miles (41,000 kilometers) away from Vesta.
(Image: © NASA/JPL-Caltech/UCLA/MPS/DLR/IDA)

An unmanned NASA probe made history 117 million miles from Earth on Saturday (July 16) when it arrived at the huge asteroid Vesta, making it the first spacecraft ever to orbit an object in the solar system's asteroid belt.

The Dawn spacecraft entered orbit around Vesta after a four-year chase and will spend about a year studying the huge space rock before moving on to visit another asteroid called Ceres.

Vesta is a huge asteroid about the size of the U.S. state of Arizona, and is also the brightest asteroid in the solar system. It is located in the asteroid belt, a band of rocky objects that encircles the sun between the orbits of Mars and Jupiter. [Photos: Asteroid Vesta and NASA's Dawn Probe]

"Today, we celebrate an incredible exploration milestone as a spacecraft enters orbit around an object in the main asteroid belt for the first time," NASA chief Charles Bolden said in a statement. "Dawn's study of the asteroid Vesta marks a major scientific accomplishment and also points the way to the future destinations where people will travel in the coming years. President Obama has directed NASA to send astronauts to an asteroid by 2025, and Dawn is gathering crucial data that will inform that mission."

NASA launched the $466 million Dawn mission in 2007 to explore the largest asteroids in the asteroid belt. Vesta is 330 miles (530 kilometers) wide, large enough that astronomers consider it to be a protoplanet. Astronomers do not understand why the asteroid is so bright and hope Dawn will answer that and other mysteries of Vesta.

After studying Vesta in unprecedented detail, the Dawn probe is expected fire up its ion propulsion system to leave orbit and head to Ceres — an object so big it is the largest asteroid in the solar system and officially designated a dwarf planet. Ceres is about 590 miles (950 km) wide. Dawn will arrive at this target in 2015, NASA officials said. [7 Strangest Asteroids in the Solar System]

Dawn launched in September 2007 and has covered more than 1.7 billion miles (2.7 billion km) on the voyage to Vesta.

Just after Dawn arrived at Vesta, the spacecraft beamed a message to Earth to alert its NASA controllers at the Jet Propulsion Laboratory in Pasadena, Calif., of the milestone. But the exact time of the probe's asteroid arrival is not yet known, NASA officials said. Mission managers initially estimated that the time of arrival would be at about  10 p.m. PDT Friday (July 15; 1 a.m. EDT Saturday).

"The time of Dawn's capture depended on Vesta's mass and gravity, which only has been estimated until now," mission managers said in a statement. "The asteroid's mass determines the strength of its gravitational pull. "

The more massive Vesta is, the stronger its gravity will be and it would have pulled Dawn into orbit earlier than expected, they added. If the asteroid is less massive, the gravitational pull would be weaker and Dawn would have taken longer to reach orbit.

But arrival time aside, the Dawn probe is most assuredly blazing a new trail in space, NASA officials said.

While past missions by NASA and other space agencies have sent spacecraft to visit asteroids, none of those targets were in the asteroid belt.

In 2000, NASA's Near-Earth Asteroid Rendezvous Shoemaker (or NEAR Shoemaker) probe went into orbit around the asteroid Eros, ultimately landing on the space rock at the end of its mission.Japan's Hayabusa mission sent a probe to collect samples from the asteroid Itokawa. That mission returned tiny grains of Itokawa to Earth last year.

Dawn's mission was first-approved by NASA in 2001, a year after the NEAR Shoemaker arrival at Eros. But budget issues prompted NASA to cancel the mission in March 2006, which sparked outcry among researchers. NASA reinstated the mission just weeks after its cancellation.

NASA is now planning to launch a new asteroid mission called Osiris-Rex, in  spacecraft to a near-Earth asteroid in 2016 and collect samples from the space rock in 2020. That mission is expected to return any samples it collects to Earth in 2023.