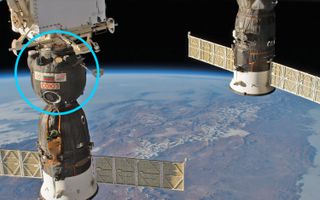 Astronauts on the International Space Station worked swiftly today (Aug. 30) to repair a minor air leak in the Russian segment of the orbiting laboratory. Although they managed to stabilize the slowly dropping air pressure inside the station, the repair job was not yet complete.

Astronauts and cosmonauts aboard the International Space Station learned of the leak, which is not life-threatening, early this morning. Ground controllers noticed a slow drop in cabin pressure Wednesday night (Aug. 29) around 7 p.m. EDT (2300 GMT) and decided it wasn't significant enough to disrupt the crew's sleep schedule, NASA officials said in a statement. After rising at their usual hour, the crew began scoping out the Russian side of the space station to pinpoint the cause of the leak.

They then discovered a tiny hole in one of the Soyuz crew vehicles docked to Russia's Rassvet module, also known as the Mini Research Module, or MRM-1. The 0.08-inch-wide (2 millimeters) hole is in the orbital module, the upper portion of the spacecraft that provides living space for the crew during flights to and from the space station. The Soyuz MS-09 arrived at the space station in June with three Expedition 56/57 crewmembers who are scheduled to depart in the same spacecraft in December. [Russia's Manned Soyuz Space Capsule Explained (Infographic)]

While flight controllers at NASA's Johnson Space Center in Houston and the Russian Mission Control Center near Moscow worked to come up with a plan, they instructed the crewmembers to release some air from the pressurized oxygen tank on the Progress 70 cargo spacecraft to help return the space station to its normal pressure.

For now, they aren't worried about running out of air anytime soon. "The crew are healthy and safe with weeks of air left in the International Space Station reserves," European Space Agency officials said in a statement.

To first plug the leak, Russian cosmonaut Sergey Prokopyev used a small piece of medical gauze soaked in epoxy, a type of resin used as a sealant. While pressure inside the space station returned to normal, the crew raised concerns over "something that looks like a problem," Prokopyev told ground controllers. He reported that a small bubble had appeared in the seal and said, "I'm not sure how it should be removed."

After several ultrasound checks, the astronauts determined that no air was leaking through the hole. However, ground controllers asked the crew to hold off on finishing the repair work until tomorrow and to keep an eye on it until then.  "We do have a recommendation to rest and not perform any more activities today," Russian flight controllers told the crew. "You have a very long day tomorrow, and we need to make sure that you will be very well rested." In the meantime, ground controllers will examine photos of the patch and try to figure out what, if anything, needs to be done about the suspicious bubble.

"Throughout the day, the crew was never in any danger, and was told no further action was contemplated for the remainder of the day," NASA officials wrote on the International Space Station blog. "Flight controllers in Houston are continuing to monitor station's cabin pressure in the wake of the repair. Meanwhile, Russia’s space agency Roscosmos has convened a commission to conduct further analysis of the possible cause of the leak."

Earlier today, Dmitry Rogozin, the director general of Roscosmos, told Sputnik News that the hole "is believed to be caused by a micrometeoroid," or a tiny fleck of space rock. However, the exact cause has yet to be determined.

Another possibility is that a small piece of orbital debris could have punctured the spacecraft. The space station occasionally must adjust its orbit to dodge pieces of "space junk." In 2012, it narrowly avoided some shrapnel from China's Fengyun 1C spacecraft, which was intentionally destroyed during an anti-satellite test in 2007.

Although the space station has debris shields to protect it against micrometeoroid impacts, the Soyuz spacecraft is not equipped with the same kind of protection.