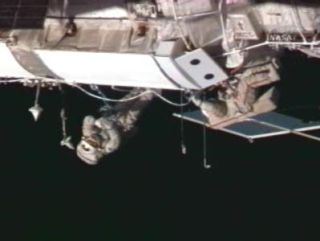 TheInternational Space Station (ISS) has new armor to guard against waywardmeteorites and orbital debris after a successful Wednesday spacewalk by twoRussian cosmonauts.

Expedition15 commander Fyodor Yurchikhin and flight engineer Oleg Kotov attached a dozenmetal plates to a Russian segment of the ISS and found signs of past damage insome areas.

"We founda dent or a hole from a meteorite," Yurchikhin told mission controllers inRussia from his perch atop the station's Zarya control module. "It lookslike a bullet hole. I want to say the size is about five to six millimeters."

Yurchikhinand Kotov installed the new debris shields and other equipment on the spacestation's outer hull during a five-hour, 37-minute spacewalk that began at10:23 a.m. EDT (1423 GMT) as the orbital lab flew 220 miles (354 kilometers)above the horn of Africa.

Wednesday'sspacewalk marked the second in eight days for the Expedition 15 crew.Yurchikhin and Kotov also installed orbital debris shields and performed othertasks during a May 30 spacewalk. NASAastronaut Sunita Williams, an Expedition 15 flight engineer, monitored herspacewalking crewmates from inside the ISS during both spacewalks.

The Expedition15 crew is now gearing up for the arrival of NASA'sSTS-117 astronauts aboard the shuttle Atlantis, which is slated to launch towardsthe ISS on June 8.

Yurchikhinand Kotov attached 12 aluminum panels to a sensitive area of the spacestation's Russian-built Zvezda service module -- which houses the ISS crewquarters -- during their Wednesday spacewalk.

"Everythingis excellent," Yurchikhin said during the installation. "I guesswe're lucky."

The newpanels, along with five others installed by the Expedition 15 crew during theMay 30 spacewalk, give Zvezda additional protection against impacts from micrometeoritesand orbital debris. NASA officials have said that such micrometeorite andorbital debris (MMOD) strikes represent a major risk to the ISS and NASAshuttles in Earth orbit.

"Thenumber one risk for the shuttle is MMOD when it's on orbit," Kirk Shireman,NASA's deputy ISS program manager, said before today's spacewalk. "It'salso that way for ISS, although the station was designed to live in a debrisenvironment."

Each of the17 aluminum plates installed by Yurchikhin and Kotov during their twospacewalks are about an inch (2.5 centimeters) thick and cover a two-foot bythree-foot (0.6- by 0.9-meter) patch of the ISS, NASA officials have said. Theyjoin six other panels that were installed by ISS astronauts during a 2002 spacewalk.

In additionto the new shields, Yurchikhin and Kotov mounted a Russian experiment dubbedBiorisk to the station's exterior to study the effects of weightlessness onmicroorganisms.

The cosmonautsalso ran a 43-foot (13.1-meter) Ethernet cable across the top of the station'sRussian-built Zarya control module as part of a computer network upgrade thatwill, once complete, allow astronauts to control the outpost's Russian segmentsfrom the U.S. modules, NASA officials said.

By thenumbers, Wednesday's spacewalk marked the 83rd excursion dedicatedto ISS construction or maintenance and the 55th to originate fromthe orbital laboratory itself. It was also the 22nd excursion tobegin at the station's Pirs docking compartment.

Both Yurchikhinand Kotov now have two spacewalks, totaling of 11 hours and two minutes oforbital work, under their belts. Yurchikhin will add to that experience during athird spacewalk planned for the Expedition 15 mission.

But thatspacewalk, a U.S. excursion in NASA spacesuits, must wait until after theupcoming STS-117 shuttle mission to the ISS, which will deliver Americanastronaut Clayton Anderson to the orbital laboratory. Atlantis astronautswill stage at least three spacewalks during their 11-day mission to install newsolar arrays and trusses to the space station's starboard side.

Anderson willrelieve Williams as an Expedition 15 crewmember and will participate in theU.S. spacewalk with Yurchikhin.

"It'sso dynamic," Yurchikhin said of during today's spacewalk as he and Kotovtook pictures while resting between tasks. "It's just like an actionmovie."