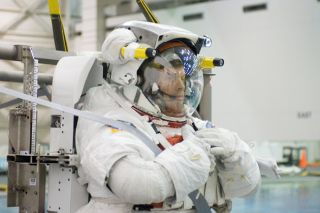 Astronaut Steven R. Swanson, STS-117 mission specialist, attired in a training version of the Extravehicular Mobility Unit (EMU) spacesuit, is about to begin a training session in the waters of the Neutral Buoyancy Laboratory (NBL) near the Johnson Space Center.
(Image: © NASA)

Two rookieastronauts, one a lifelong space fan and the other a born explorer, are gearingup for their first taste of spaceflight when NASA's shuttle Atlantis rocketstowards orbit this week.

First-timespaceflyers John "Danny" Olivas and Steve Swanson, along with fivefellow crewmates, are due to launch spaceward June 8 aboard NASA's space shuttle Atlantis on aconstruction mission to the International Space Station (ISS).

"We'vegot an absolutely fantastic crew," Olivas said in a NASA interview. "Icouldn't ask to have a better set of crewmates, and I'm doing the best I can totry and keep up with them."

Olivas andSwanson, both trained spacewalkers, will help deliver a pair of new 17.5-tontrusses and a pair of solar arrays to the starboard side of the ISS during NASA'splanned 11-daySTS-117 mission.

Of themission's three planned spacewalks, Olivas will take part in the first andthird excursions while Swanson will participate in the second.

"Probablythe most exciting thing is going to be the spacewalk, followed by the launch,"Swanson told reporters in a preflight interview.

"Thereason I'm here is because I wanted to be part of space exploration," saidOlivas, 41, told reporters in a preflight interview. "I'm looking forwardto it. It's been a long journey, but it's been a very satisfying one."

Thatjourney began as a child, when Olivas would scan the skies from the roof of hishome alongside his father, who used to build rocket engine components duringwork as a machinist, the astronaut said.

"It'llbe, for me, very full circle-ish to go from being a kid on top of a roof in ElPaso, Texas to being literally on top of the world working on a tremendous featof human engineering and scientific progress," Olivas said, adding that hehopes for a chance to look out away from Earth during his spacewalks. "And then to look deep into space knowing that that viewinto the past is really our future, that's what I'm looking forward to themost."

Olivasholds both bachelors and masters degrees in mechanical engineering, and ultimatelyearned a Ph.D. in mechanical engineering and materials science from Rice University. The married father of five holds six U.S. patents and ? among otherprofessions ? helped evaluate materials for future spacesuits before joiningNASA's Jet Propulsion Laboratory (JPL) as a senior research engineer.

In 1998,Olivas joined NASA's spaceflyer ranks and first served within the agency'sRobotics Branch as the lead for the space station's robotic arm and plannedDextre robot attachment. He also helped develop tools and techniques forin-flight shuttle heat shield repairs before heading an ISS Branch team thatwatches over the proper configuration and assembly of station modules and cargoships.

"Istill look up today and I realize how much there is out there that we don'tknow," Olivas said. "I'm very proud and very happy to be working inthis industry where we're taking baby steps, but at least we're moving in theright direction."

LikeOlivas, Swanson joined NASA's astronaut ranks in 1998as much to push his own personal boundaries as those of human spaceflight.

"I'vealways wanted to do a kind of exploring," said Swanson, 46, in a NASAinterview. "[I]f I could have lived 200 years ago, I would have loved tohave been with like Lewis and Clark, and just been living in the woods andexploring all sorts of new areas?But since I couldn't do that, I figured thenext best thing was to try to be an astronaut. And I got lucky."

But Swansondid not wait to become an astronaut before joining NASA. He first signed on tothe space agency in 1987 as a systems engineer in the Aircraft OperationsDivision at the Johnson Space Center (JSC) in Houston, Texas where NASA trainsits astronaut corps. He earned a doctorate in computer science from Texas A&M University among other degrees.

Swansonhails from Steamboat Springs, Colorado, where he began an active lifestyle ofcamping and hiking. Those interests later gave way to outdoor sports, weightlifting, running, woodworking and spending time with his wife Mary and theirthree children.

"Theway I kind of look at it, this spaceship is kind of like a camping trip,"Swanson said. "It's a small volume that you live in without the comfortsof home."

It was atJSC that Swanson worked with NASA's Shuttle Training Aircraft, a modifiedaircraft designed to simulate the flight characteristics of an actual orbiterduring landing. That experience will come in handy on STS-117, where Swansonwill serve as both spacewalker and flight engineer to assist Atlantis'commander and pilot duringliftoff and landing.

Completingconstruction of the space station, and applying lessons learned there to futuretreks to the Moon or beyond, is vital for humanity's constant push to explore,said Swanson, who added that he is grateful to play a part in the orbitallaboratory's evolution.

"I'vebeen working at NASA for quite a few years and so it's just?wonderful to kindof see this whole thing come to fruition, the whole space station itself,"said Swanson. "It's just a dream come true."