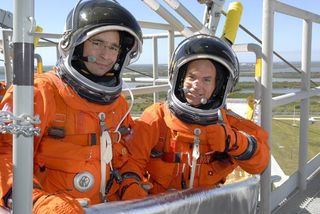 Space shuttle Atlantis mission STS-117 commander Rick Sturckow (right) gives a thumbs up after he and pilot Lee Archambault practice emergency egress procedures in a slidewire basket at the 195-foot level of the fixed service structure on Launch Pad 39A.
(Image: © NASA/Kim Shiflett)

"Ithink the number one thing I'm looking forward to is getting the job done,"Sturckow told reporters in a preflight interview. "I look forward togetting up there again."

A colonelin the U.S. Marine Corps, Sturckow hails from Lakeside, California, where hegrew up on a nearby ranch with his family to raise turkeys, cattle and,eventually, trees.

"Itwas a pretty, small, rural town at the time," Sturckow, 45, said of hishometown, views of which he's caught from space during past missions along withthe rest of California and Baja California. "I used to race down there. Iwas able to see all that from orbit. It was beautiful."

In fact, itwas racing that put Sturckow on the path to space. At age 16, he started workas a truck mechanic and lube boy, then graduated to off-road and stock carracing in a car he built while at California Polytechnic State University in San Louis Obispo where he earned a bachelor's of science degree in mechanicalengineering.

A MarineCorps pilot-turned university professor suggested Sturckow's talents wouldprove useful should he join the Marines as a pilot.

"And Idid. It's been great," Sturckow said.

Sturckowhas logged more than 4,790 hours in over 50 different aircraft and flew 41combat missions during Operation Desert Storm in 1990. He earned his test pilotwings in 1992 before moving to Houston and NASA, and is married to wifeMichele.

An avidflyer with an interest in physical training, Sturckow joined NASA's astronautranks in 1994 and to-date has spent about 24 days working in space.

"Ithink that the human exploration is very important to maintain the interest ofall of us Americans in space exploration," Sturckow has said. "It'sgreat to send robots and orbiters and do some limited surface exploration, buttill you put a human on that other body, you're not going to know what it'sreally like there."

Atlantis'STS-117 flight, however, marks Sturckow's first mission as commander and he hasapplied lessons learned under his past commanders to meet the task.

"It'sabout the people, and understanding what their job is and who to ask fordifferent kinds of help," Sturckow said of a shuttle commander's role.

"I'dlove to see in my lifetime a lunar colony established," Sturckow said in aNASA interview. "Not just a small station but a real group of people thatare living and working toward that next goal and the next step beyond."

WhileSturckow is gearing up for his third trip to space, Archambault is eagerlylooking ahead to his first shuttleflight to orbit.

A U.S. AirForce colonel by training, Archambault will serve as both shuttle pilot andorbiter robotic arm operator during Atlantis' STS-117 mission. He holdsbachelor's and master's degrees in aeronautical and astronautical engineeringfrom the University of Illinois-Urbana, and has three children with wife KellyRenee.

Archambault,46, joined the U.S. Air Force in 1985 and flew a number of aircraft includingthe F-117A Stealth Fighter, in which he flew 22 combat missions between 1990and 1991 during the Gulf War. He later served as an instructor pilot and testpilot to aid aircraft weapons development before joining NASA's astronaut ranksin June 1998.

"It'sbeen a long time, and we're certain it's going to be worth the wait,"Archambault told reporters of the upcoming launch in a preflight interview.

Archambault'sinterest in NASA and spaceflight is rooted in his home town of Bellwood, Illinois, the same city where Eugene Cernan -- the last astronaut to walk on the Moon in1971 -- grew up.

There isinherent risk in human spaceflight, but Archambault stressed that police officers,firefighters and U.S. soldiers currently engaged overseas face dangerous jobson a daily basis, which puts his own mission challenges in perspective.

That risk,Archambault believes, is worth the effort of NASA and its partners tocomplete the International Space Station'sconstruction push further outwards back towards the Moon.

"It'san honor to be here and simply put, that's all I can say on that,"Archambault said. "We're going to leave this planet; we're going to goback to the Moon."