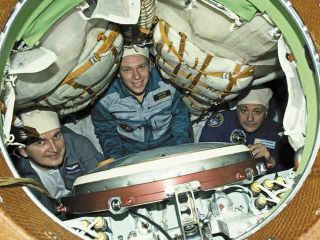 Two Russiancosmonauts, a spaceflight veteran and a first-time flyer, are just one day awayfrom rocketing into orbit to begin a six-month mission at the InternationalSpace Station (ISS).

ISSExpedition 15 commander Fyodor Yurchikhin and flight engineer Oleg Kotov, both ofRussia's Federal Space Agency, are set to lift off aboard their Soyuz TMA-10spacecraft at 1:31 p.m. EDT (1731 GMT) on April 7.

"We're oldmen, but we're a very young crew," Yurchikhin, a 48-year-old spaceflightveteran, said in a preflight interview. "It's important to do our job well, andwe are ready."

Riding intoorbit with Yurchikhin and Kotov will be American space tourist CharlesSimonyi, who is reportedly paying about $25 million for his 13-day trek tothe ISS under an agreement between the Federal Space Agency and theVirginia-based firm Space Adventures.

The two professionalcosmonauts will replace Expedition 14 commanderMichael Lopez-Alegria and flight engineer Mikhail Tyurin, who arecompleting their own six-month mission aboard the ISS and will return to Earthwith Simonyi on April 20. NASAastronaut Sunita Williams, also aboard the space station, will remain onboardto join the Expedition 15 crew.

NASAofficials said Expedition 15 is the first long-duration ISS crew to include twoRussian cosmonauts since the Expedition 5 mission of 2002.

"JohnGlenn, Neil Armstrong, Yuri Gagarin, [Valentina] Tereshkova, those were myheroes, the heroes of my time," Yurchikhin said of his youth in a NASAinterview. "I remember the time and I know I wanted to be a cosmonaut since Iwas very little...so for me it was not a question to debate whether I wanted tobe a cosmonaut or not."

The allureof the cosmonaut and astronaut profession lies in its variety, Yurchikhin told SPACE.com,adding that all spaceflyers must be part pilot, doctor, scientist, diver,engineer and photographer.

Launchingin April is fortuitous, he added, because the station crew change periodcrosses April 12, a space holiday in Russia that commemorates the first humanspaceflight in 1961.

"It's agood fate for us, because we hope that on our greatest holy day in space, the CosmonauticsDay ...when Yuri Gagarin had his historic first flight human's first flight inspace, we will be on ISS," Yurchikhin said, adding that NASA's first shuttleflight also occurred on April 12 in 1981. "It's like, now, a twice holiday forus."

Amechanical engineer with a Ph.D in economics, Yurchikhin joined the RussianSpace Corporation (RSC) Energia's cosmonaut corps in 1997 after holding aseries of flight controller and engineering positions that culminated in hisrole of lead engineer for the joint Shuttle-Mir Space Station and NASA-Mirprograms. He first flew aboard NASA's space shuttle Atlantis during the 11-day STS-112mission in October 2002, and is well versed in joint crew operations aboardthe orbital laboratory.

"I very wellunderstand, when shuttle comes to us, how I work with the shuttle because Ihave this experience," said Yurchikhin, who has two daughters with his wifeLarisa. "New for me will be when we close the hatch and continue our flightlike three people, like an expedition. It will be new for everybody."

For Kotov,the path to space has been a long one. The 41-year-old Simferopol, Ukraine nativeis making his first spaceflight with Expedition 15 despite more than a decade ofcosmonaut training.

A colonelin the Russian Air Force, Kotov was first selected as a cosmonaut candidate bythe Yuri Gagarin Cosmonaut Training Center in 1996, eight years after joiningthe facility as a test-doctor to study the effects of spaceflight on the humanbody. He and his wife Svetlana have two children.

"When Istarted going to medical school, the question arose of what my specializationwould be," Kotov, a certified SCUBA diver, said in a NASA interview. "And Iwanted to become a specialist in space medicine."

Kotov hasfilled a number of roles since his cosmonaut selection, including stints as aGagarin Center representative at NASA's Johnson Space Center astronaut trainingfacility in Houston and as chief of the CAPCOM (spacecraft communicator) Branchin the Cosmonaut Office. He has also served as a backup crewmember for theExpedition 6 and Expedition 13 space station missions.

During Expedition15, Kotov will serve as Soyuz commander and sit it the center seat of hiscrew's TMA-10 spacecraft during launch and ISS rendezvous. But it is science,including some 50 Russian experiments, and a robust educational program that hehopes to be a hallmark of the six-month spaceflight.

"I believethat to fly this [mission] is like the frontier of Earth science," Kotov toldSPACE.com, adding that he hopes the flight piques student interest in spaceand spurs their thoughts towards future Moon or Mars flights. "Mankind alwayshas to have an idea or a goal for the general imagination to move forward."

But firstKotov must reach space, and he has sought a few pointers from his moreexperienced cosmonaut colleagues.

"Each ofthe flown cosmonauts I've asked about what to expect [has] said every flight isdifferent," Kotov said. "As for me, I'm just looking forward to it. I'm readyto fly."