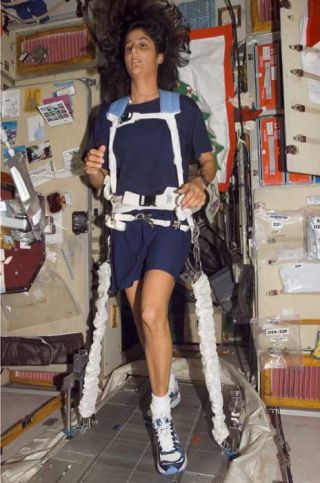 NASAastronaut Sunita Williams is ready to run the BostonMarathon, though her trek aboard the International Space Station will carryfarther than most runners.

Williams,an ISSExpedition 14 flight engineer, has spent months aboard the orbitallaboratory training for the April 16 race, despite the fact that she and hertwo crewmates routinely cover its 26.2-mile (42-kilometer) course in seconds asthey orbit the Earth at some 17,500 miles (28,163 kilometers) per hour.

"I startedthis a couple of months ago right after our spacewalks finished, and I startedhitting the treadmill pretty hard," Williams, 41, told the New EnglandSports Network Wednesday. "I think I'm almost there."

A native ofNeedham, Massachusetts,Williams qualified for the Boston Marathon last year when she completed the2006 Houston Marathon in three hours, 29 minutes and 57 seconds. The BostonAthletic Association has issued her the bib number 14,000 for the race.

"Iwould like to encourage kids to start making physical fitness part of theirdaily lives," Williams said in a NASA interview. "I thought a big goal like amarathon would help get this message out there."

Her sisterDina Pandya, fellow NASA astronaut Karen Nyberg andfriend Ronnie Harris will be running the marathon on Earth beginning at 10:00a.m. EDT (1400 GMT) April 16, though whether Williams' schedule allows her torun in tandem with them remains to be seen, the astronaut said.

"This is aworking laboratory, a working spaceship, and we have a new crew coming here,"Williams told the Boston Globe Wednesday in an interview broadcast onNASA TV, referring to the anticipated arrival of two Expedition 15 cosmonautsand a space tourist on April 9. "Hopefully we'll actually get to do it at leastas close to the time as the marathon is going on."

Williamssaid many of her family and friends will gather between the race's Mile 14 andMile 15, where she used to watch the marathon during her youth.

"I think abunch of friends of mine will be out there at a support stop, and that's sortof the transition between Expedition 14 and Expedition 15 which is going onduring this timeframe," said Williams, who will join the Expedition 15 crew forpart of their mission. "I think, from that standpoint, it will be sort ofsignificant."

Williams isabout midway through a planned six-month mission aboard the ISS, where shearrived in December, and runsabout four times a week on the station's Treadmill Vibration IsolationSystem (TVIS). Located in space station's Russian-built Zvezdaservice module, the space treadmill is designed to help astronauts preservebone and muscle mass through exercise. It holds astronauts down with a harnessand network of bungee cords, though the set up can put strain on the hips andshoulders.

"Thetreadmill is a little tough," Williams said, adding that unlike on Earth, sweatclings to the body in space which can also prove uncomfortable. "The first timeI got on there, I couldn't even do a mile and my legs were wobbling back andforth."

"I thinkit's going to be pretty challenging for her to stay on that thing for such along time, it really is kind of a torture device," Lopez-Alegriasaid of the ISS treadmill, adding that he and other space station crewmemberswill try to keep Williams entertained during the run. "We'll be throwing wetsponges and trying to keep her occupied...but it won't be like having the throngsof people that will be lining the course in Boston that day."

In trainingsessions, Williams has run up to 15 miles (24 kilometers) straight on the spacestation's treadmill and plans to set a six-mile (9.6-kilometer) pace during themarathon. But the real payoff will come at the marathon's end, she said.

"I thinkI'm going to have good lunch," Williams said, adding that lasagna and raviolion her menu. "I think I might have two servings of that, a big glass of orangejuice and put my legs up."