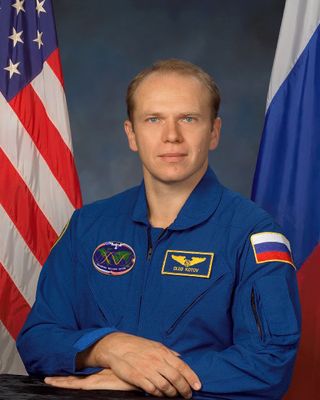 EDUCATION: In 1982 Dr. Kotov finished high school in Moscow andentered the Kirov Military Medical Academy, from which he graduated in 1988.

EXPERIENCE : After graduation from the Academy in 1988, Dr. Kotov servedat the Gagarin Cosmonaut Training Center, where he held the positions of Deputylead test-doctor and Lead test doctor.

Duringhis service he dealt with problems of altitude physiology and space flighteffects on a human body. He gained experience in practical training and medicalsupport of EVAs on the RussianMir Space Station, and was a crew surgeon and instructor for biomedicaltraining and science program training. He is a certified SCUBA diver.

Hewas selected as a cosmonaut candidate by GCTC in 1996. From June 1996 to March1998, he completed a course of basic training for spaceflight. In March 1998,he received a test-cosmonaut qualification.

SinceJuly 1998, Dr. Kotov has been a cosmonaut-researcher and test-cosmonaut of theGCTC Cosmonaut Office. From May-August 1998, Dr. Kotov trained for a flight onthe Soyuz and the Mir station as a backup crewmember to the Mir-26 mission.

SinceOctober 1998, he has been undergoing advanced training for ISS flights. Heserved as a flight engineer and Soyuz commander on the ISSExpedition-6 and ISSExpedition-13 backup crews.

FromFebruary-October 1999 he served as a Representative of GCTC (DOH) at JSC.During 2001-2002 he worked as a CAPCOM for Expedition-3 and 4 in MCC-M andMoscow Support Group in MCC-H. In 2004 he became Chief of the CAPCOM Branch inthe Cosmonaut Office.

Dr.Kotov is assigned as flight engineer and Soyuz commander on the Expedition-15mission to the InternationalSpace Station, arriving at the complex aboard a Soyuz spacecraft scheduledto launch in April 2007, for a six month tour of duty aboard the Station.