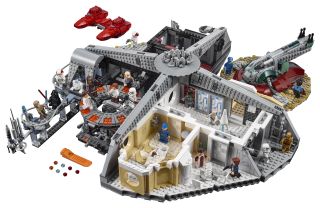 Relive the scene of an epic betrayal on "Star Wars" with Lego's latest addition to the franchise — a model of Cloud City, where hero Han Solo's friend Lando makes a nasty deal with the series villain, Darth Vader.

After the set hits stores and online shops on Oct. 1, fans will pay $349.99 to construct four key scenes from the 1980 movie "Star Wars: The Empire Strikes Back. The massive set has 2,812 pieces, and includes 18 minifigures. Examples include the heroes Han Solo, Princess Leia and Luke Skywalker; Solo's betraying friend, Lando Calrissian; droids; and Stormtroopers. [25 Lego Sets You Need in Your Collection]

This is what to expect in every section:

And here's a closer look at the set.