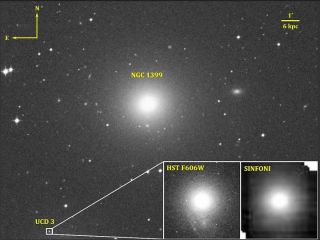 The giant elliptical galaxy NGC 1399 and its satellite galaxy UCD3, which has a strangely large supermassive black hole at its heart. The black hole was discovered by the SINFONI instrument on the European Southern Observatory's Very Large Telescope in Chile.
(Image: © NASA/STScI/ESO/Afanasiev et al.)

Astronomers spotted a huge black hole in the center of a very small galaxy, which could help scientists better understand how these kinds of galaxies — called "ultracompact dwarfs" — form.

The galaxy, called Fornax UCD3, is about 60 million light-years from Earth. (A light-year is the distance light travels in a year, which is roughly 6 trillion miles, or 10 trillion kilometers.) The galaxy, astronomers discovered, likely hosts a supermassive black hole that is about 3.5 million times the mass of Earth's sun. The black hole happens to be about the same mass as the Milky Way's central black hole, but Fornax UCD3 is much smaller than our home galaxy, according to a statement from Lomonosov Moscow State University.

While astronomers did not provide exact statistics for Fornax UCD3 in the statement, they said dwarf galaxies like it are typically 300 light-years across and weighs of a few tens of millions of solar masses. The Milky Way, by comparison, is a giant; it's 100,000 light-years across and at least 400 billion times the mass of the sun. [Images: Black Holes of the Universe]

This means Fornax UCD3's black hole is a heavyweight inside its host galaxy. Astronomers said the black hole is roughly 4 percent of the total galaxy mass, while "normal" galaxies have a much lower ratio of just 0.3 percent.

It's not the first time such a huge black hole was found inside an ultracompact dwarf galaxy; Fornax's black hole is the fourth one discovered, astronomers said. They suggested tiny galaxies can host huge black holes because long ago, a more massive galaxy passing close by robbed the dwarf galaxy of most of its stars. After this galactic encounter, what remains today in the dwarf galaxy is a compact nucleus with only a few stars.

"To be able to say with complete assurance that this hypothesis is correct, we need to discover more supermassive black holes in UCDs [ultracompact dwarfs]," Anton Afanasiev, a physicist at Lomonosov Moscow State University and lead author on the new work, said in the statement.

He said that in future research, his team will be looking for black holes in more massive, yet less dense, compact elliptical galaxies, to see if the hypothesis works for other galaxy populations.

Astronomers spotted the black hole using the tool SINFONI (Spectrograph for Integral Field Observations in the Near Infrared). It's a spectrograph installed on one of the 8-meter elements of the Very Large Telescope in Chile, which is operated by the European Southern Observatory.

Spectrographs allow astronomers to measure star velocities. The new observations showed that the velocity dispersion of Fornax UCD3's stars — or the difference in speed between the average stellar population and individual stars — was particularly pronounced near the center. A black hole was the best explanation for the high-velocity dispersion, according to the researchers.

The scientists subsequently ran a model with different masses for black holes in the center, and concluded that the one in Fornax UCD3 is a 3.5-million-solar-mass black hole. While they also considered there may be no black hole at all, their models rejected that assumption with a statistical significance of 99.7 percent, according to the statement.

An article based on the research was published in July in the Monthly Notices of the Royal Astronomical Society.