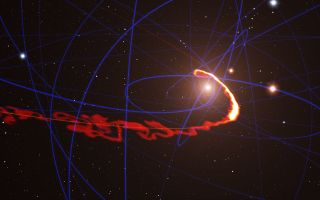 This simulation of a gas cloud passing close to the supermassive black hole at the centre of the galaxy shows the situation in mid-2013.
(Image: © ESO/S. Gillessen/MPE/Marc Schartmann)

Astronomers have spied a huge gas cloud being pulled like taffy around the supermassive black hole at the heart of the Milky Way.

Their observations suggest that the space cloud will be completely ripped apart over the next year as it swirls closer to the galactic drain.

Most galaxies are thought to have enormous black holes at their center, and the one at the middle of the Milky Way — roughly 25,000 light years from Earth — has a mass about four million times that of the sun. [Milky Way's Black Hole Rips Apart Gas Cloud (Video)]

Scientists first spotted a gas cloud accelerating toward our galaxy's supermassive black hole in 2011. Data from 2004 show that the cloud was once shaped like a circular blob, but the intense gravitational forces of the black hole have now stretched it spaghetti-thin, researchers say.

Their new observations were made this past April with the European Southern Observatory's Very Large Telescope (VLT) in Chile. The cloud's light becomes more difficult to spot the more it gets stretched, but a 20-hour exposure with the VLT's special infrared spectrometer, called SINFONI, allowed scientists to measure the cosmic body getting closer to its doom.

Scientists still don't know where exactly the gas cloud came from, but they say the new observations rule out some possibilities.

"Like an unfortunate astronaut in a science fiction film, we see that the cloud is now being stretched so much that it resembles spaghetti," Stefan Gillessen, of the Max Planck Institute for Extraterrestrial Physics in Germany, who led the observing team, said in a statement. "This means that it probably doesn't have a star in it. At the moment we think that the gas probably came from the stars we see orbiting the black hole."

At its closest approach, the grossly stretched cloud is a little more than 15 billion miles (25 billion km) from the black hole itself — about five times Neptune's distance from the sun, the researchers say. This is dangerously close considering the black hole's humongous mass, and the cloud, Gillessen says, is "barely escaping falling right in."

Gillessen and colleagues say the head of the cloud has already whipped around the black hole and is speeding back in our direction at more than 6.2 million mph (10 million km/h), roughly one percent the speed of light. The tail is following at a slower pace (about 1.6 million mph, or 2.6 million km/h).

"The cloud is so stretched that the close approach is not a single event but rather a process that extends over a period of at least one year," Gillessen said in a statement.

The new observations will be detailed in the Astrophysical Journal. Scientists plan to intensely monitor the region throughout the year to watch as the cloud gets completely torn apart — a rare opportunity to test theories about how black holes pull in mass.