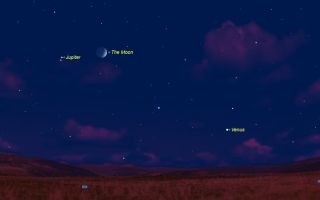 See Jupiter and Venus with the crescent moon in the southwest sky this week.
(Image: © Starry Night software)

Planet watchers are in for a special show this week, as the bright celestial bodies Venus and Jupiter shine in the sky alongside the crescent moon. You can catch the show tonight (Aug. 15) and tomorrow (Aug. 16) — as long as the skies are clear.

On those days, look for the sky show just after sunset, in the western sky. Jupiter will be shining well above the horizon and will appear as a bright light to the left of the moon, according to EarthSky.org. To find Venus, look to the right of the moon and then peer down. Venus will be there, just above the horizon. The planets will be best visible together between 8:30 p.m. and 10 p.m. local time on both nights, according to WHIO-TV7.

You can enjoy the show using just your bare eyes, but with a small telescope you'll be able to see a little more detail. Venus will get as bright as magnitude -4.6 in August and is partly illuminated (like a half-moon), according to Space.com skywatching columnist Joe Rao. The planet is shrouded in cloud, however, so you won't see any detail on the planet's surface. [Stargazing Maps: Best Night Sky Events of August 2018]

Jupiter is also bright, shining at approximately magnitude -2. With a telescope, you'll be able to see bands of clouds in Jupiter's atmosphere as well as its four largest moons: Europa, Ganymede, Callisto and Io. With a larger telescope, you may even spot shadows of the moons on Jupiter during Jovian solar eclipses.

If you have a telescope, you can catch a double transit as Europa and Io cast shadows on the giant gas planet on Thursday (Aug. 16). The two moons' shadows will slowly crawl across the Earth-facing side of Jupiter from 7:56 p.m. EDT to 10:10 p.m. EDT (2356 GMT to 0210 GMT on Aug. 17), according to SkySafari Software's Chris Vaughan. Europa will go first, with Io following about 9 minutes later. Both moons' shadows will be visible until the shadows move off the planet together at 10:10 p.m. EDT. If you're more of a daylight astronomer and you have a pair of binoculars, you can spot Jupiter passing by Earth's moon starting at 1:30 p.m. local time that afternoon. (Yes, Jupiter is visible during the daytime!)

Venus and Jupiter aren't the only planets visible in the night sky right now. If you look to the southeast, Mars (shining red) and Saturn (a yellowy white) are visible on either side of the constellation Sagittarius, according to the Space Telescope Science Institute. With a telescope, you can spot the famous rings around Saturn. Mars is under dust storm conditions, so not much is visible on its surface right now.

And before long, Mercury – the closest planet to the sun – will also be visible at dawn. It should be visible with the naked eye around Aug. 22, according to Rao. The best chance to see it will be Aug. 26, when Mercury reaches the greatest elongation from the sun, or the point in its orbit where it is farthest away from the sun. It will be visible roughly 90 minutes before sunrise. (Because Mercury stays close to the sun in the sky year-round, skywatchers should take safety precautions and avoid staring at the sun.)