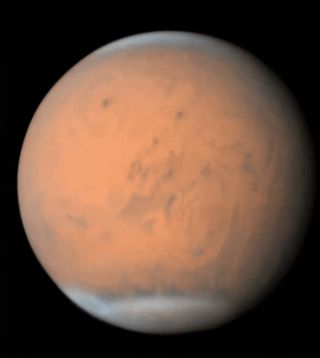 This frame from an animation created by astrophotographer Damian Peach shows how a global dust storm has overtaken Mars in the summer of 2018.
(Image: © Damian Peach)

The dust is finally beginning to clear on Mars, but it'll probably still be a while before NASA's sidelined Opportunity rover can phone home.

A global dust storm has enshrouded Mars for more than a month, plunging the planet's surface into perpetual darkness. That's complicated life significantly for the solar-powered Opportunity, which has apparently put itself into a sort of hibernation; the rover hasn't contacted its controllers since June 10.

A long-awaited dawn seems to be on the horizon, however. [Mars Dust Storm 2018: How It Grew & What It Means for the Opportunity Rover]

"It's the beginning of the end for the planet-encircling dust storm on Mars," NASA officials wrote in an Opportunity mission update yesterday (July 26).

Scientists studying the storm "say that, as of Monday, July 23, more dust is falling out than is being raised into the planet's thin air," agency officials added. "That means the event has reached its decay phase, when dust-raising occurs in ever smaller areas, while others stop raising dust altogether."

Other data points support this conclusion. For example, measurements by NASA's Mars Reconnaissance Orbiter show that temperatures in the middle atmosphere have stopped rising, indicating less absorption of solar heat by dust particles.

In addition, NASA's Curiosity rover — which is nuclear-powered and can therefore work through the storm — has observed a decline in overhead dust at its location, the 96-mile-wide (154 kilometers) Gale Crater, agency officials said.

Some Martian landforms previously hidden beneath the dust can now be spotted from orbit again, they added, and may even be visible using Earth-based telescopes by early next week, when Mars will make its closest approach to our planet since 2003.

But don't hold your breath waiting to hear from Opportunity, which has been exploring Mars since 2004. According to yesterday's mission update, "it could still be weeks, or even months, before skies are clear enough" for Opportunity to recharge its batteries and ping its handlers.

The storm is a serious threat to the six-wheeled robot, but mission team members have expressed cautious optimism that Opportunity will survive. Their calculations suggest that temperatures at Opportunity's location — the rim of the 14-mile-wide (22 km) Endeavour Crater — won't get cold enough to freeze the rover to death.

That fate befell Opportunity's twin, Spirit, after it got bogged down in sand in 2010 and couldn't reorient itself to catch the sun.